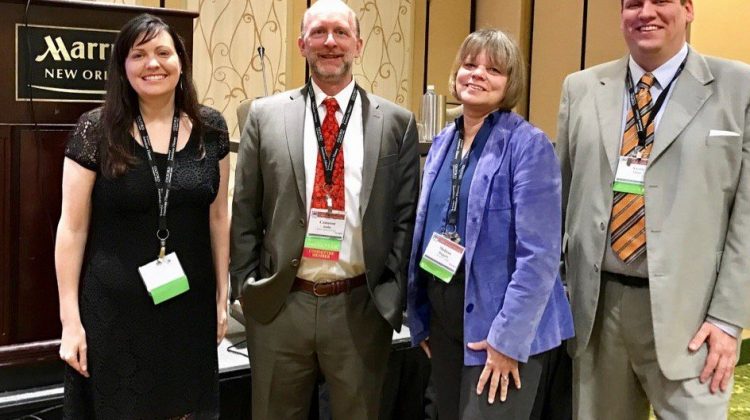 Our reports from the annual meeting of the Organization of American Historians (OAH) continue to roll into The Way of Improvement Leads Home.  This report comes from Melissa Daggett, an instructor of United States history at San Jacinto College in Pasadena, Texas and the author of Spiritualism in Nineteenth-Century New Orleans: The Life and Times of Henry Louis Rey (University Press of Mississippi, 2016).  Melissa reports on a panel sponsored by the OAH Committee on Community Colleges.  Enjoy!  –JF
On April 8, 2017, the Committee on Community Colleges opened the Saturday sessions with a panel of three, who presented papers that were informative, entertaining, scholarly, and timely. All three papers contained the common theme of the influence of the Mississippi River upon the course of American history, and it was fitting that the presentations were done in a location next to the river.
Melissa Daggett of San Jacinto College discussed the circulation of people and ideas into New Orleans from the Northeast, and from France and the French colony of Saint-Domingue in her paper, “Spiritualism in Nineteenth-Century New Orleans.” This circulation helped to establish New Orleans as the premier city for Spiritualism within the confines of a very conservative South during the late antebellum period through the early years of Reconstruction. Daggett began with a description of the genesis of Modern American Spiritualism, recounting the Fox sisters’ early forays into séance Spiritualism in New York. The new non-mainstream religion eventually crossed the Mason-Dixon line and because of its diversity and openness to new cultures and religions, New Orleans provided fertile ground to nurture Spiritualism. Daggett emphasized mediums and speakers from the Northeast who traveled to St. Louis across the mid-West and then boarded a steamboat for the final leg of the journey.
Many séance circles flourished in the Creole Faubourgs of Tremé and Marigny as well as the American sector of the city. Daggett focused on Le Cercle Harmonique, the francophone séance circle of Henry Louis Rey (1831–1894), a Creole of color who was a key civil rights activist, author, and Civil War and Reconstruction leader. Daggett included scans of spiritual communications from the René Grandjean Collection, rare photographs, and maps indicating the flow of peoples and ideas into New Orleans in her PowerPoint. Melissa Daggett’s presentation was based upon her recently published book, Spiritualism in Nineteenth-Century New Orleans: The Life and Times of Henry Louis Rey (University Press of Mississippi, 2017).
Jodie Brown of American Public University focused her presentation, “The Voodoo That You Do: Exploration of African Traditions in Louisiana Tourism,” on the disconnect between reality and myths perpetuated on tourists in New Orleans. Brown pointed to the simplistic narratives of secondary school textbooks that are based on nationalism and morality as being one reason that the typical tourist accepts tour information dispensed by Crescent City tour guides. Brown, like Daggett, emphasized the importance of the Haitian Revolution and the resulting diaspora, upon New Orleans’ rich and complex history. Voodoo is a religion of African origins with strong Haitian influences that incorporates Catholic priests, and not simply a cult led by Marie Laveau.
The haunted house on Royal Street is a stable of tour guides, who delight in gory tales of mutilation and torture of Mme Lalaurie’s slaves. Brown argued that these tales are exaggerated and reflect the noble cause of abolition whose advocates often sensationalized the treatment of slaves to make a point. History was used as a tool to lecture the masses on moral lessons.
Brown discussed the importance of history education at both the secondary and post-secondary levels to present a more accurate picture of complex issues, events, and people. With a good history education, tourists to the Crescent City can understand the true events that form New Orleans’ history, and not sensationalized and simplistic stories.
Aaron Miller of Ivy Tech Community College focused on the importance of environment on music when he presented “Big River: The Mississippi Delta in the Life and Music of Johnny Cash.” Miller, a huge fan of Cash, said that the distinct geographical features of Cash’s boyhood home of Dyess, Arkansas had a profound impact on his childhood and served as a source of inspiration for his music. Dyess was created in 1934 as a new community which directed federal aid to impoverished and desperate people. The immediate goal was to help the residents to survive the Great Depression. As a young man, Cash struggled with poverty, spending much of his time picking cotton growing in the thick Arkansas mud, sometimes called “gumbo.” Music was Cash’s salvation. During the day, he sang songs while toiling in the cotton fields,and at night, he absorbed various genres of music, listening to the radio which managed to rely stations from far away cities like Memphis and Chicago.
Two of Cash’s early hits with the iconic Sun Records, “Five Feet and Rising” and “Big River,” are indebted to Cash’s formative years in the Mississippi Delta. Aaron Miller’s paper is based upon a book project.
Cam Addis of Austin Community College acted as Chair.