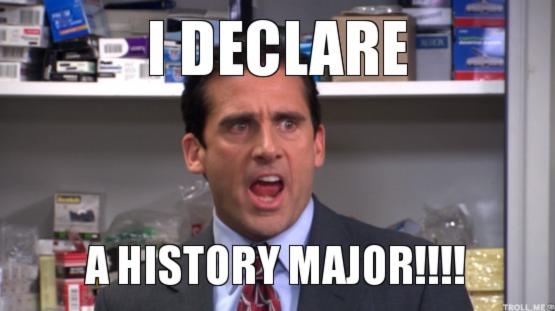 Today we recorded episode 21 of The Way of Improvement Leads Home Podcast.  The episode will drop soon. We are not yet ready to announce the topic of the episode but I will say that our guest is a venture capitalist and a great defender of the liberal arts.
After the recording I came home and found Paul Sturtevant’s article in the April issue of Perspectives on History: “History is Not a Useless Major.”  This is the kind of article that should be placed in the history department information folders that are given to prospective or undeclared students at open houses and campus visits.  It does a wonderful job, using data, of debunking three common myths:

In advising students, talking to parents, and listening to the priorities articulated by state legislatures, we continue to encounter widespread myths about the lives of people who graduate with history BAs. These myths are largely based on misinformation about the prospective lives of those who major in history. They paint life with a degree in history as a wasteland of unemployment and underemployment—that careful study of Asoka’s conquests or the Industrial Revolution leads to a life of “Would you like fries with that?”

A potent way to combat these myths is with concrete data. Thankfully, a massive repository of data, the American Community Survey (ACS), tells us much about the lives of history majors. Conducted by the US Census Bureau each year since 2000, the ACS is a statistical survey of 3.5 million American households. It includes questions on a wide range of topics, from demographic details like age and race/ethnicity to situational data like housing and employment status. Most usefully for us, it also records individuals’ undergraduate majors. These data are then compiled and aggregated into one-, three-, and five-year estimates.

From the ACS, we know that over the years 2010–14, some 29.7 percent of all American adults over 25 completed a bachelor’s degree or higher. Of those, 2.21 percent received a bachelor’s in history or US history. The ACS data offer us a snapshot of these history majors across the country and at different phases of life: from recent graduates to those in retirement.

Overall, the ACS data suggest that the picture for history majors is far brighter than critics of the humanities would have you believe, even those who think the sole purpose of a college degree is to achieve a well-paying job.

Read the entire post, with graphs and charts, here.