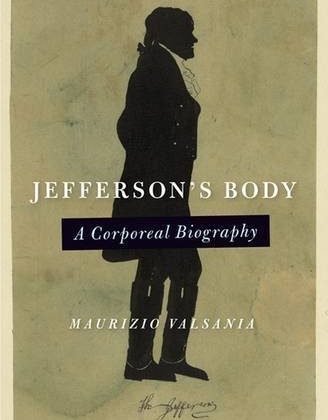 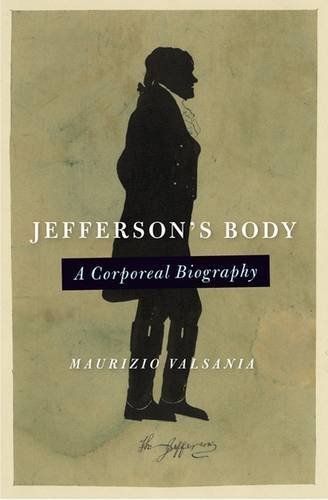 Maurizio Valsania is Professor of American History at the University of Turin, Italy. This interview is based on his new book, Jefferson’s Body: A Corporeal Biography (University of Virginia Press, 2017).
JF: What led you to write Jefferson’s Body?
MV: I have always enjoyed reading biographies of American founders and past figures in general. However, wonderful though many biographies are, I often feel that something is missing. Biographers make forays only into the several corporeal dimensions that make us who we are—so that the reader can get basic information about how tall, imposing, elegant, or gentle the subject of that life was. Biographers look for the character, the intellect, the mind, the spirit. But they do not turn the body into the main subject of their analyses. And yet, philosophers and anthropologists have made clear that the body is more than just an appendix or the external coat of the self: it is through the body that we come to be who we are. Our consciousness, cognitive processes, deepest emotions, and beliefs are usually shaped and structured by corporeality and corporeal interactions. This means that our body is often the main actor—at least as important as the mind—of the ongoing drama we call life. By writing Jefferson’s Body, I’ve answered my need to push biographers’ comfort zone a little further up (or, better, further down), and to make the genre more materialistic.
JF: In 2 sentences, what is the argument of Jefferson’s Body?
MV: As a typical 18th-century a man who lived in the age of theater and amid all the excitement coming from the emerging middle-class standards, Thomas Jefferson was singularly engaged with his own corporeality. His body, and not only his mind, took up many challenges and made him into an “appropriately” modern, natural, and masculine type—while setting this same type apart from the other bodies (Native American, African American, and female bodies) that were considered less-than-normal.
JF: Why do we need to read Jefferson’s Body?
MV: Over the last 15 years or so, excellent studies of single dimensions of American 18th-century corporeality have emerged, from clothing and fashion to manners, from medical sciences and dietary habits to consumption, from whiteness and masculinity to sexuality. Relying on more and more sophisticated methodologies, these studies have discovered many new elements. Readers may find it interesting to go through a book that encompasses these different fields and, for the first time, applies different methodologies to tell the corporeal biography of one of the most singular, challenging, and at times peculiar man.
JF: When and why did you decide to become an American historian?
MV: When in the late 1990s I did my PhD in intellectual history, I became fascinated by a strain of radicalism crossing Europe and reaching the shores of the Atlantic colonies during the second half of the 18th century. “Reshaping the world anew” became the catchphrase of many philosophers, politicians, scientists, and entrepreneurs. The new American nation has remained my repository of case-studies since.
JF: What is your next project?
MV: I’m well into drafting a corporeal biography of one of the most beloved American hero ever, George Washington. I promise I will deliver a man not many Americans are familiar with.
JF: Thanks, Maurizio!