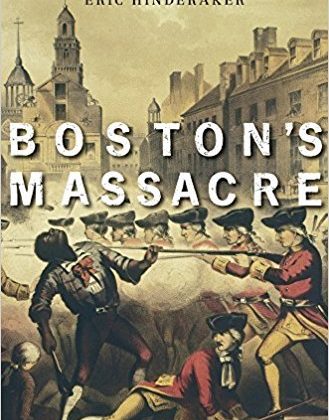 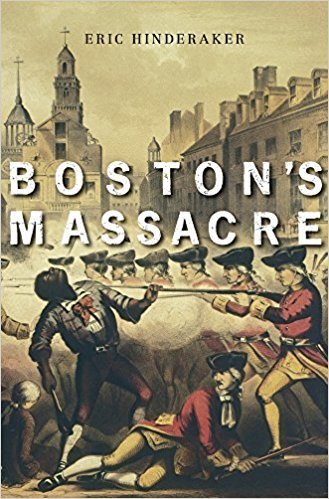 Eric Hinderaker is Professor of History at the University of Utah. This interview is based on his new book, Boston’s Massacre (Belknap Press: An Imprint of Harvard University Press, 2017).
JF: What led you to write Boston’s Massacre?
EH: The book is about the Boston Massacre, which occurred on March 5, 1770, when a group of British soldiers fired into a crowd of civilians and killed five of them.  Initially, I was interested in the eyewitness testimony, which is voluminous but fundamentally irreconcilable.  As my research progressed, I became fascinated with the problem faced by commander-in-chief Thomas Gage and his subordinate officers, who had to manage military-civilian relations throughout the colonies of British North America at a time when many thousands of troops were stationed there.  In the end, I realized that, above all, the book is about memory: how we interpret what we see and argue about events when they’ve just happened, how we commemorate them to solidify a particular interpretation of their significance, and how they are eventually reshaped through selective remembering and forgetting.
JF: In 2 sentences, what is the argument of Boston’s Massacre?
EH: As the apostrophe in the title suggests, the book argues that the “massacre” belonged to the town of Boston: the town created the conditions that gave rise to the shootings; it championed the view that the shootings were a massacre rather than an “unhappy disturbance,” as the soldiers’ defenders would have it; and it kept the memory of the massacre alive in print, in commemorative orations, and in local culture throughout the war of independence.  Boston was the crucible of the American Revolution—its indispensable community—and the Boston Massacre was the catalyzing event that forged the town’s collective sense of grievance and purpose.
JF: Why do we need to read Boston’s Massacre?
EH: Today, when we inhabit an era of sharp and continuous political disagreement, many people look fondly on the past—and especially the era of the American Revolution—as a time of widespread consensus and rational political behavior.  Boston’s Massacre makes clear that the politics of the revolutionary era were no less divisive than our own.  Nor were opinions shaped by an impartial press or high-minded statesmen.  Fundamental principles were at stake, then as now, and people disagreed about everything, including the bare facts of an event like the Boston Massacre.  Were the townspeople innocent and aggrieved victims of excessive force, or were the soldiers being assaulted so fiercely by a mob that they had no choice but to shoot?  Boston’s Massacre allows us to observe the process by which confused impressions were deployed in the service of competing narratives, and then to trace the evolution of those narratives across a long span of time, even into our own.
JF: When and why did you decide to become an American historian?
EH: I majored in history in college, but I did not initially intend to become a historian.  When I did decide to apply for graduate school, I thought I wanted to study modern European history.  But I had the good fortune to arrive at the University of Colorado at the same time that four brilliant early Americanists joined the department: Fred Anderson, Virginia DeJohn Anderson, Gloria Main, and Jackson Turner Main.  I was introduced to early American history at a moment when the field was undergoing a renaissance, and I discovered that its core issues resonated deeply with my own curiosity and interests.
JF: What is your next project?
EH: I have three main projects in the offing.  With Rebecca Horn, my colleague in colonial Latin American history at the University of Utah, I am working on a very broad-gauge account of the colonization of the Americas.  François Furstenberg of Johns Hopkins University and I are writing a reinterpretation of Frederick Jackson Turner that casts him as a colonial historian rather than a western historian, and that argues for his extraordinary prescience in anticipating the current shape of the field.  And on my own, I am just beginning work on a project that will explore the outpouring of energy and capital in the Restoration era (ca. 1660-1690) that reshaped England’s colonial enterprise in North America.  I hope they’ll keep me busy for awhile!
JF: Thanks, Eric!