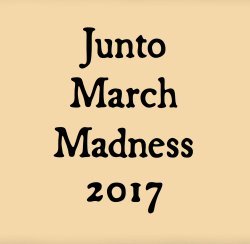 The Junto March Madness tournament is back.  This year Junto March Madness is covering books in early American history published since 2014.
But there are a few changes from past years that will certainly raise the ire of your inner Patrick Henry and prompt you to reread the Pennsylvania Constitution of 1776, that so-called “beast without a head.”
First, the tournament will feature 32 books rather than 64.
Second, the Junto bloggers “have decided to forego the open nomination process” and seed books selected by the 25 members of the blog.
In the past, the Junto March Madness tournament began with a wild and woolly nomination process in which readers could suggest their favorite works.  It was democracy at its best.  There were always enough nominations to fill out a 64-book field and the “people” were able to have their voices heard in the shaping of that field.
No more.
My sources tell me that this year’s field was chosen inside a locked room in Philadelphia.  Michael Hattem, in an attempt to protect the privacy of the selection committee from other history bloggers milling around the area, boarded-up all the windows.  Since the meeting was held in March, Ben Park installed portable heaters in the room. They were cranked up to 11 in order to recreate as closely as possible a similar Philadelphia meeting that occurred 230 years earlier in roughly the same location.
In the end, it is abundantly clear that the Junto members are taking a Federalist 10 approach to the selection of this year’s field.  They appear to be worried about the role of factions in the nominating process.  They no longer want powerful democratic fan bases like the one at The Way of Improvement Leads Home to nominate books like Was America Founded as a Christian Nation? or The Way of Improvement Leads Home: Philip Vickers Fithian and the Rural Enlightenment in Early America. (Technically, these books would be ineligible since they were published before 2014, but you get my point).
The Junto bloggers know that they are unable to remove the causes of faction (The Way of Improvement Leads Home readers and other “popular” bloggers), so they are going to do their best at controlling their effects.  Apparently “The 25” don’t trust the people to make wise decisions about who is “in” and who is “out,” so they have self-appointed themselves to “refine” and “filter” the field.
Fair enough.  What was once a great democratic experiment in liberty has fallen prey to a counter-revolution of the worst kind.  (So this is why Michael Klarman’s The Framers’ Coup didn’t make the field this year!).   I smell a rat!
As you let this all sink in, and as your outrage begins to burn, remember that you have less than hour to make your first round picks.  🙂