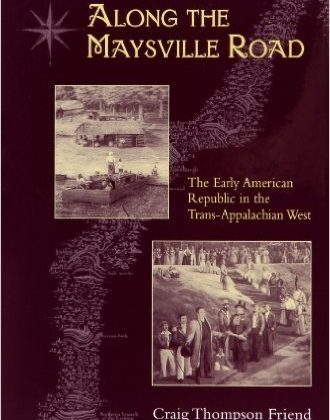 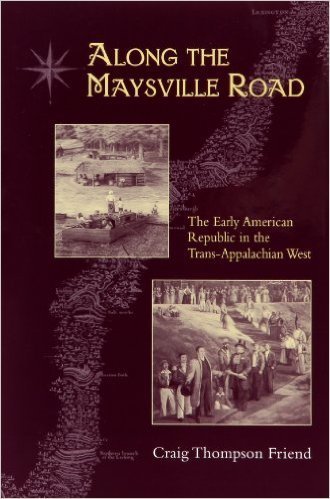 Craig Thompson Friend is CHASS Distinguished Graduate Professor of History and Director of Public History at NC State University. This interview is based on his new book, Along the Maysville Road: The Early American Republic in the Trans-Appalachian West (University of Tennessee Press, 2017).
JF: What led you to write Along the Maysville Road?
CTF: I came across a map exhibited at the Kentucky Historical Society. Drawn by Victor Collot, a French traveler, “Road from Limestone to Frankfort in the State of Kentucky” (1795) is upside down—north is down and south is up. I wanted to know why, and that initial and rather simple inquiry gave rise to a dissertation about American settlement along an old buffalo trace during the “frontier” stage of Kentucky’s history, roughly the 1770s through 1812. The road provided me a stage on which to examine how themes of the Early American republic—republicanism, democracy, urban development, evangelical Christianity, and nationalism—shaped the construction and evolution of American communities and cultures. It also allowed me to imagine these themes as more fluid and mobile, traveling up and down the road with politicians, preachers, merchants, common people, slaves, church-goers, and thousands of migrants.
When I transformed the dissertation into a book, however, I recognized that its story needed to extend into the 1830s with the buffalo trace’s evolution into the Maysville Road which, in 1830, became the focus of President Andrew Jackson’s internal improvements veto. So, I researched an entire other book, taking the story from 1812 to 1836. This allowed me to incorporate themes that had not fully evolved in the earlier story—racial slavery, refinement, the rise of a middle class. I came to realize later, with the completion of my second monograph Frontier Kentucke, that intellectually I had been constructing a narrative bridge from the “frontier” to the “Old South” in Kentucky’s history. By stopping in the 1830s, however, I failed to grasp that thematic possibility at the time.
JF: In 2 sentences, what is the argument Along the Maysville Road?
CTF: Along the Maysville Road, American settlers competed to shape communities and cultural landscapes through “large interwoven patterns of cultural transformation” (those themes of Early American Republic which I previously listed). Those contests framed the values, beliefs, and aspirations of the Americans who settled along the road, manifesting in the evolution of the road itself and culminating in the political battles over its internal improvements.
JF: Why do we need to read Along the Maysville Road?
CTF: So often, “frontier” histories are formulated as stories on the margins, on the borderlands of the American nation. I imagined the old buffalo trace and its settlement as reflective of the new nation’s cultural evolution as Philadelphia.
Maybe a better reason to read it, however, is to see how a historian evolves in his thinking. I think our profession expects us to hatch from graduate school fully advanced in our understanding of the past and how to apply that knowledge to anything that we study. A discerning eye will uncover in my book, however, a clear evolution in historical thinking between the pre-1812 chapters (first conceived for the dissertation) and the latter chapters (added for the book). Not all of us bloom fully with the first monograph, or even the second. Now, twenty years into the profession, I am more excited than ever about what I want to say about the past.
JF: When and why did you decide to become an American historian?
CTF: As I note in the acknowledgements to Along the Maysville Road, I decided I’d be a historian in eighth and ninth grade. I had yet to imagine how I would be a historian, but there was no doubt that I would somehow practice history as a career. It’s a testament to the power of inspiring teachers who can excite students about history and make it relevant to their lives. When I graduated college, however, I was unprepared to move on to graduate school. Instead, I began teaching in public schools, which required continuing education credits for renewal of my teaching certificate. At one of the continuing education programs, when I heard another inspiring educator, Theda Perdue, speak on the Cherokees and racialized enslavement, I had my “conversion experience” and realized that I wanted to become an American historian, researcher, writer, and teacher at the collegiate level.
JF: What is your next project?
CTF: I have three projects underway—a monograph, a textbook, and an edited collection.
The monograph is a biography of Lunsford Lane, an African American born in Raleigh, North Carolina, in 1803. He purchased his freedom in 1835, worked to purchase the freedom of his wife and six children, was tarred and feathered by a working-class mob, and run out of the state. In 1842, he wrote a narrative that was widely read among northern audiences, and that is as much as most people knew about Lane. There is so much more, but I will save those revelations for the book.
The textbook is a collaboration with Jim Klotter on a revision of The New History of Kentucky. I am finding it quite a challenge to sustain the spirit of Lowell Harrison, who originally collaborated with Jim on the original edition and who passed away in 2011, and reshape the narrative to reflect the most recent scholarship and my own interpretation of early Kentucky.
The edited collection is another collaborative project with Lorri Glover, with whom I have produced two previous collections. This time we are creating Rewriting Southern History, a worthy successor to John Boles and Evelyn Nolen’s masterwork Interpreting Southern History (LSU, 1987) and the equally pivotal predecessor Writing Southern History, edited by Arthur Link and Rembrandt Patrick (LSU 1967).
JF: Thanks, Craig!