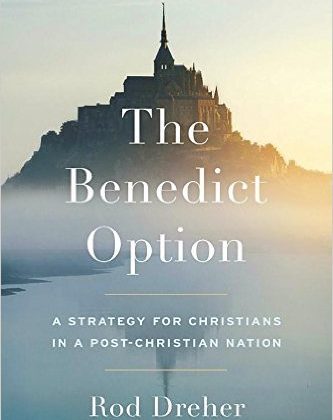 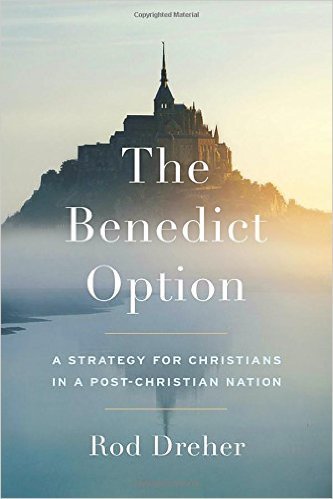 In his March 2017 Christianity Today cover story, conservative writer Rod Dreher introduces evangelicals to “The Benedict Option.”
I like Dreher’s published works.  I read his book Crunchy Cons at a time in my intellectual journey when I was also reading a lot of Wendell Berry, Christopher Lasch, and others writing about the importance of “place.”  Berry and Lasch provided a lot of the “theory” behind my treatment of Philip Vickers Fithian’s “rural Enlightenment” in The Way of Improvement Leads Home.  As I type this, I am looking up at the bookshelf above my desk where I see the green spine of my paperback copy of Dreher’s The Little Way of Ruthie Leaming.  I hope to get to it soon. I read Dreher’s blog at The American Conservative when I can, but I often find him to be a bit too much of a culture-warrior for my tastes.  (Although I imagine that some might say the same thing about me and my blog).
If I remember correctly, Dreher has been preaching the “Benedict Option” ever since the Obergfell v. Hodges Supreme Court decision guaranteed the right to same-sex marriage in America.  He saw this decision as something akin to the collapse of a Christian civilization. (Although, to be fair, his argument for the decline of Christian civilization is much more sophisticated than this).
Dreher coined the phrase “Benedict Option” after reading this passage in Catholic moral philosopher Alasdair MacIntyre’s book After Virtue:
It is always dangerous to draw too precise parallels between one historical period and another; and among the most misleading of such parallels are those which have been drawn between our own age in Europe and North America and the epoch in which the Roman empire declined into the Dark Ages. Nonetheless certain parallels there are. A crucial turning point in that earlier history occurred when men and women of good will turned aside from the task of shoring up the Roman imperium and ceased to identify the continuation of civility and moral community with the maintenance of that imperium. What they set themselves to achieve instead often not recognizing fully what they were doing—was the construction of new forms of community within which the moral life could be sustained so that both morality and civility might survive the coming ages of barbarism and darkness. If my account of our moral condition is correct, we ought also to conclude that for some time now we too have reached that turning point. What matters at this stage is the construction of local forms of community within which civility and the intellectual and moral life can be sustained through the new dark ages which are already upon us. And if the tradition of the virtues was able to survive the horrors of the last dark ages, we are not entirely without grounds for hope. This time however the barbarians are not waiting beyond the frontiers; they have already been governing us for quite some time. And it is our lack of consciousness of this that constitutes part of our predicament. We are waiting not for a Godot, but for another—doubtless very different—St Benedict.
According to his forthcoming book on the subject, Dreher believes:
The light of the Christian faith is flickering out all over the West, and only the willfully blind refuse to see it. From the outside, American churches are beset by challenges to religious liberty in a rapidly secularizing culture. From the inside, they are being hollowed out by the departure of young people and a watered-down pseudo-spirituality. Political solutions have failed, as the triumph of gay marriage and the self-destruction of the Republican Party indicate, and the future of religious freedom has never been in greater doubt. The center is not holding. The West, cut off from its Christian roots, is falling into a new Dark Age.
Dreher thinks that Christians should respond to these problems by retreating into communal enclaves along the lines suggested by MacIntyre.
Every now and then someone asks me what I think about Dreher’s idea.  I like a lot of it.  I think that Christians always need to sustain strong communities for the purpose of nurturing our young people in the faith and preserving our values.  As a professor who teaches at a church-related college, I often worry about the way the church forms its young people in matters of biblical and theological literacy, moral reflection, and the Christian intellectual life.  When these kids arrive in my classroom I can no longer expect them to be steeped in these in things.
Moreover, as I have written here and elsewhere, much of the current attempts by conservative Christians to change the world through politics or the forging of a “Christian nation” wreaks of idolatry. It conflates the church with the nation-state. The failure of evangelicals to make these distinctions mutes the prophetic voice of the church. The church needs to be the church–a community of believers with a common religious faith actively seeking to follow the teachings of the Bible and Christian orthodoxy.
Having said all that, I also like John Inazu‘s idea of “confident pluralism.”  I have written about this Inazu’s work here.  Over at the Christianity Today website, Inazu offers his critique of the “Benedict Option.”
Here is a

I agree with much of Rod Dreher’s cultural diagnosis, though we differ in posture and tone. Like Dreher, I believe many of my neighbors hold wrong-headed views with real-world consequences. But I also see a lot of good in those neighbors and a lot that I can learn from them. Tim Keller and I have argued that our confidence in the gospel lets us find common ground with others even when we can’t agree on a common good. This confidence in our own beliefs and the institutions that sustain them is also what I’ve suggested allows Christians to pursue confident pluralism.

I share Dreher’s desire for partnership across faith traditions—but I would go further. Dreher references the 1990-era effort, Evangelicals and Catholics Together. Today we might think about something like Evangelicals and Muslims Together. I don’t mean that as a call for theological unity but for real friendships and public partnership. Evangelicals would benefit from these kinds of relationships with Muslims in pursuing charitable work on behalf of others, advocating the value of pluralism in this country, and defending the importance of religious liberty.

I strongly recommend Inazu’s book.  I also recommend University of Virginia theologian Charles Mathewes on these issues.  I drew heavily from Mathewes’s book A Theology of Public Life and Republic of Grace in my own book Why Study History?: Reflecting on the Importance of the Past.

Here is what I wrote:

…Americans live in isolated enclaves that make it difficult for them to engage in public with people who are not like them.  American Christians are also guilty of this kind of isolationism.  God wants us to turn toward him, but he also wants us to turn toward others in a spirit of Christian love and understanding.  Yet it is much easier to escape to the comfortable enclaves we have created for ourselves where everyone is just like us.  Such cultural isolationism prevents us from getting to know people who represent a different political orientation, religious belief, class, race, or sexual orientation.  Or perhaps our escapism is more theological in nature–a belief that human history has already been “scripted” by God.  Such an eschatological approach to life teaches us that this world is not as important as the next one, so we do not need to invest in it with any degree of seriousness.  According to theologian Charles Mathewes, this kind of escapism weakens our spiritual lives, for public engagement cultivates Christian character, purified our souls, and prepares us for our heavenly home.  In the process of loving our neighbor–a practice that goes to the heart of civic life–we grow as Christians.   Humans need to live in society.  We fulfill our vocations as Christians in the world through dialogue with and service to others.  It is the place where we work out our salvation and exercise our spiritual gifts and talents.

What if we viewed the study of the past as a form of public engagement?  Like any type of public engagement, an encounter with the strangeness of the past can inevitably lead, in Mathewes’s words, “to contemplation of the mysteries of providence, the sovereignty of God, and the cultivation of the holy terror that is integral to true piety.  Even if the people we engage with are dead, we can still enter into a conversation with the sources that they have left behind.  In a passage strikingly familiar to [historian’s Sam] Wineburg’s and [Walter] McDougall’s thoughts on the discipline of history, Mathewes argues that when we encounter people in all their strangeness we “find ourselves decentered, we find that we are no longer the main object of our purposes, but participate in something not primarily our own.  This confession then is itself a turning to the other, not in the interests of mutual narcissism–which makes the other only a consolation prize for having to be already ourselves–but as an openness to transforming, and being transformed, by, the other.” (Republic of Grace, p.210).

It seems to me that Dreher, Inazu, and Mathewes are all correct.  Christians need strong. monastic-like communities, set apart from politics and public life, to cultivate people in the traditions of the faith so that they can pursue the kind of confident pluralism and civic engagement that Inazu and Mathewes suggest can deepen faith and public witness.