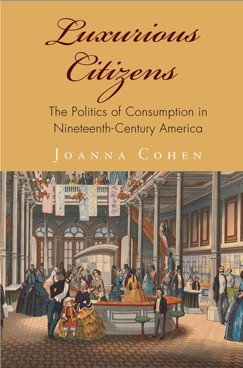 Joanna Cohen is a lecturer in the School of History at Queen Mary University of London. This interview is based on her new book, Luxurious Citizens: The Politics of Consumption in Nineteenth-Century America (Penn Press, 2017).
JF: What led you to write Luxurious Citizens?
JC: I found my way into this book in three stages! The first step was reading Godey’s Ladies Book in my first year of graduate school. I was fascinated by the elaborate fashion plates and the juxtaposition of those images with numerous stories that praised the virtues of American women’s thrift and economy. These contradictions got me interested in the ways in which consumption habits were framed in overlapping ways in American cultural life, as signifiers of cultural sophistication and national virtue, not to mention the gender norms they promoted. The second step was two graduate courses I took: one on Gender, Nationalism and Citizenship, the other on the History of Consumer Culture in America. Both piqued my interest in different ways. When it came to citizenship I became increasingly dissatisfied with the idea that citizenship was simply a legal relationship. I wanted to explore the ways in which citizens imagined their relationship to the nation-state, especially when it came to obligations. Turning to consumer culture, I read avidly about the politics of consumption in the eighteenth century and picked up the story again in the twentieth century, but found little that explained how one connected to the other. Finally, after only a month in the archives at the American Philosophical Society, I found the phrase “Luxurious Citizens” in a speech given by “Pig Iron Kelley” in front of the Franklin Institute. That phrase summed up my conviction that the histories of citizenship and consumption were intertwined in crucial ways. I set out to trace those connections, wanting to understand the ways in which consumer capitalism shaped the meaning of citizenship in nineteenth-century America.
JF: In 2 sentences, what is the argument of Luxurious Citizens?
JC: At the close of the Revolution, the newly-formed government expected citizens to serve their nation through self-sacrifice, by limiting their consumption of imported luxuries. But time and again, through war and peace, ordinary Americans demonstrated that they would not accept such limitations on their desires. Instead, they transformed themselves into citizen-consumers, claiming that the freedom to consume could be of service to the nation. In 1861, at the outbreak of war, the Union government not only acknowledged the power of the citizen-consumer, they harnessed that power to the service of the war effort. Using a tariff to harvest much-needed revenue from their citizens’ desires, the Union confirmed that the citizen-consumer was an important member of the body-politic – whose freedom to indulge themselves could save the republic or send it to its destruction.
JF: Why do we need to read Luxurious Citizens?
JC: For readers interested in nineteenth century capitalism, the origins of consumer culture in America, the gendered meanings of citizenship and the political economy that shaped the road to the Civil War, Luxurious Citizens has much to offer. But the book is also timely reflection on the far-reaching consequences of the apotheosis of the citizen-consumer. The idea that a citizen can serve the state through their consumption has a flip side: it also suggests that citizens’ consumer choices can be blamed when the state encounters economic failure.
In 2008, when the United States faced the great crash, the first round of blame was placed squarely on the shoulders of ordinary citizens who had overspent and over extended their credit. Such a story hid the deep-rooted structural failures of the US economy. Luxurious Citizens reveals the ways in which these narratives of individual accountability took root in the United States, often cloaked in the language of civic rights and personal freedoms. It is an exploration of the ways in which Americans imagine the way in which their economy works, and how the state can use and even exploit those understandings. So, at a moment when neo-liberalism as an ideology stands on the brink of collapse, Luxurious Citizens will hopefully remind people that they can re-imagine the nation’s political economy and redefine the relationship between the citizen and the state.
JF: When and why did you decide to become an American historian?
JC: Well officially I decided I wanted to become an American historian when I was doing my final year Honors thesis at Cambridge. I looked at the work of four great female authors and wrote a paper on the way in which those writers constructed (and deconstructed) what it meant to be a woman in nineteenth century America. But unofficially, I have to confess, it goes back to reading Little House on the Prairie and Little Women as a girl. Those stories still fascinate me. I recently re-read them when I got all my childhood books down from the attic for my daughter, and I still find the narratives of survival, ambition, compromise and resilience utterly compelling.
JF: What is your next project?
JC: Right now, I am working on a project that focuses on the ways in which Americans experienced loss in the nineteenth century. I explore how new capitalist, bureaucratic and commercial technologies shaped people’s emotional understanding of losing their homes, possessions and environments.

I am also working on a collaborative project with Zara Anishanslin, that explores how people “came to terms” with the ends of conflicts in the Atlantic World. Privileging visual and material culture as a source, this project asks how people made their peace with violence and war through the things and images they had in their lives.
JF: Thanks, Joanna!