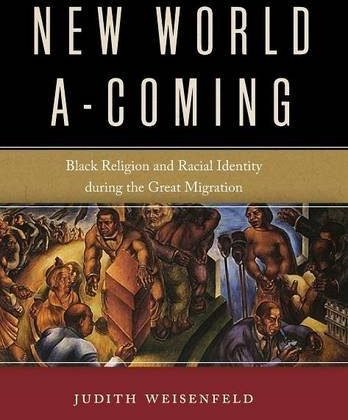 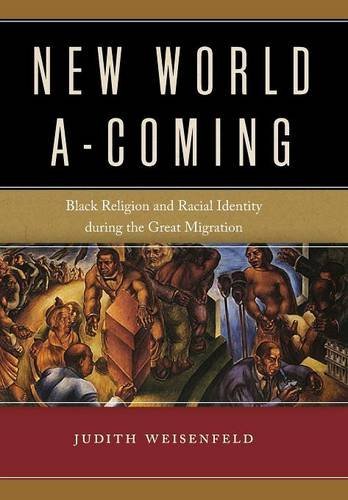 Judith Weisenfeld is Agate Brown and George L. Collord Professor of Religion at Princeton University. This interview is based on her new book, New World A-Coming: Black Religion and Racial Identity during the Great Migration (NYU Press, 2017).
JF: What led you to write New World A-Coming?
JW: I have been interested in the black new religious movements of the Great Migration period since I read Arthur Huff Fauset’s 1944 ethnographic study, Black Gods of the Metropolis: Negro Religious Cults of the Urban North, in an undergraduate course. Fauset was concerned with questions about what the religious creativity fostered by the migration and urbanization of African Americans in the early twentieth century revealed about the dynamics of black religion, particularly with regard to connections to African religious traditions. In this way he was participating in a broader scholarly conversation among anthropologists about “African retentions” in African American culture. As I thought about revisiting some of the groups Fauset had profiled and my fascination with their charismatic leaders, distinctive theologies, and novel rituals and social organizations grew, it became clear to me that I brought different questions and tools to the project than had Fauset.
Two aspects of Fauset’s approach remained important for me as I researched and wrote the book, however. First, although a number of wonderful historical and ethnographic studies have been published in recent years examining the Nation of Islam, Father Divine’s Peace Mission, congregations of black Jews, and the Moorish Science Temple – the groups on which I focus in New World A-Coming – most examined a single group of a number of groups under the same religious umbrella. Like Fauset, I wanted to think comparatively and, as a historian, to think about what gave rise to these novel movements in the early twentieth-century urban North, about commonalities, and differences. Second, Fauset attended not only to the leaders of the movements and their theologies but to the members, asking questions about what appealed to them and what they gained in joining these groups. Trying to recover some sense of the experiences of members of the groups was what really motivated me to take up the project, and the challenge of finding sources to do so was both exciting and frustrating at times.
JF: In 2 sentences, what is the argument of New World A-Coming?
JW: Through attention to the theologies and religious practices of the leaders and members of these groups, I explore how people of African descent debated the nature of racial categories and discussed their impact on political, social, and spiritual opportunities. I argue that the appeal of the Nation of Islam, the Moorish Science Temple, Father Divine’s Peace Mission, and congregations of Ethiopian Hebrews lay not only in the new religious opportunities that membership in them afforded, but in the novel ways they formulated an inseparable, divinely ordained religio-racial identity.
JF: Why do we need to read New World A-Coming?
JW: The book provides a fresh look at the black religious movements of the Great Migration period, emphasizing the experiences of both leaders and members who proposed new ways of thinking about black history, individual and collective identity, and sacred future. The book’s attention to African American religious diversity is also significant. Because religious African Americans have largely been affiliated with Protestant denominations, the field has focused on church history. Yet, African Americans have demonstrated great religious creativity and have challenged black Protestant orthodoxy in ways that have important implications for our understanding of the history of religion in American life.
New World A-Coming also adds to the literature on the history of race in the U.S. by highlighting the work of black peoples to challenge or redefine categories of race. Moreover, by locating religious identity and narrative at the core of the study, the book demonstrates the critical role that religion has played in shaping understandings of race in early twentieth-century African American life. As a study of modes of interaction between religion and race in the American past, the book also provides valuable insight into contemporary trends, particularly in light of racially-inflected religious discourse and religiously-inflected racial discourse in American public culture. Current discussion of America’s achievement of or failure to reach the status of post-racial society have taken place without full understanding of the complexities of black racial identity in nation’s past. The book breaks the limited binary of racial/post-racial and provides a more complex picture of racial identities and discourses.
JF: When and why did you decide to become an American historian?
JW: I came to the study of American history through Religious Studies. My undergraduate work as a Religion major at Barnard College explored the transnational history of black theology in connection with the anti-Apartheid movement in South Africa and, in deciding to go to graduate school in Religion, I knew I wanted to focus on African American religious history specifically. In fact, I proposed a project something like New World A-Coming in my application, but ended up writing a dissertation on another aspect of African American religion in the period: a history of African American women’s political and social activism in the New York City Young Women’s Christian Association. I remain fascinated by early twentieth-century African American religious history, particularly in arenas outside of churches and denominations, and I enjoy the archival challenges of telling these sorts of cultural histories.
JF: What is your next project?
JW: My current research examines late nineteenth and early-twentieth-century psychiatric discourses that connected race, religion, and mental illness among African Americans and explores how these racialized discourses shaped the approaches of mental hospitals, courts, and prisons to people psychiatrists deemed disabled by virtue of religiously grounded mental illness.
JF: Thanks, Judith!