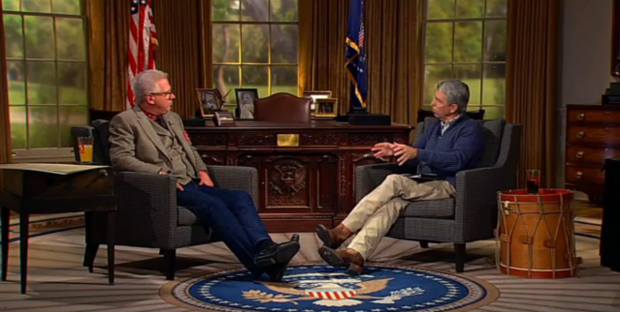 Earlier tonight I wrote a post about a David Barton and Glenn Beck plan to bring their pseudohistory to American schools.  You can read it here.
Since I published the post I received two excellent comments.  I am re-posting them below.
The first comment comes from Yale history graduate student Michael Hattem:
Without money, we have to fight on platforms that don’t require large amounts of money. When you search for Barton on YouTube, it comes up with dozens (if not hundreds) of videos of him talking his nonsense. Why is there no series of videos by actual historians entitled, “Why David Barton is Wrong about the Founding?” That’s something that could be done relatively cheaply, if the inclination and will existed. In addition, we should petition the organizations in our field that have resources to put a small amount of them toward directly counteracting this initiative. Why can’t the AHA or OAH or similar organizations help provide the organizational impetus for actual historians willing to volunteer time to visit local public schools in their own areas. No distinguished speaker fees, no travel, just historians getting into schools FOR FREE through the imprimatur of our professional organizations. We don’t have the money that they have but it doesn’t mean there aren’t ways we can’t collectively counteract the willful miseducation of our nation’s youth about the fundamentals of American history.
After reading Michael’s post I began to rethink my Spring 2017 season of the Virtual Office Hours.  I was going to do something about history in the #ageoftrump, but now I am might do something on Barton.   We start filming this week.
The second comment comes from a regular reader of The Way of Improvement Leads Home who goes by the name “SpaceHistorian.”
I recently read Rick Perlstein’s excellent book, The Invisible Bridge: The Fall of Nixon and the Rise of Reagan. He documented how a few wealthy Libertarian families, the Coors, the DeVos, the Mellon Scaifes, the Olins, the Bradleys, etc., poured money into right-wing think tanks (Heritage Foundation, Eagle Forum, American Enterprise Institute, CATO Institute, Hoover Institute, etc.) in order to take over the Republican Party with the goal of promoting the unholy mixture of Ayn Randian economic policies with alleged Judeo-Christian moral principles. The Koch Brothers came on the scene later but with many of the same Libertarian goals. All of this money funded AstroTurf groups that infiltrated the GOP at the local level, the state level and through Ronald Reagan, the federal government. These conservative think tanks have provided the so-called “experts” that regularly appear in newspapers, magazines, online and on TV network news shows and cable news shows all parroting the same bought and paid for Libertarian narrative. So this is a “revolution” that has been decades in the making and largely pulled off outside public view disguised as a average American citizen’s movement.
So how do we overcome decades of indoctrination, subversion, the takeover of all levels of government, the takeover of corporate media, and the hundreds of millions of dollars spent to build and defend this Libertarian/bastardized Christian worldview? Money equals power and influence in America. The more money, the more power, the more influence people and groups have in America. The people dedicated to the Libertarian/Christian alliance do not play by any rules or respect for the facts. All they care about are results which justifies their actions. So how do those of us with a sense of human decency, ethics and conscience battle the forces arrayed against us? We now live in a world where “alternative facts” are the new “truth” and evidence to the contrary is dismissed as fake news by those who traffic in producing and promoting fake news.
So solve these challenges and our Constitutional Republic just may survive to be enjoyed by our children and grandchildren. Fail and the United States ends the great experiment in democracy started in 1787. So no pressure Dr. Fea, no pressure at all sir.
“Though conservative think tanks get a lot of money, their money does not come from the wealthiest foundations by any means. There are plenty of liberals with enough money to match the conservatives. Wealthy liberals, however, want their money to go as directly as possible to the downtrodden and oppressed, with nothing significant designated for infrastructure, career development, or their intellectuals. From a position external to the liberal moral system this seems irrational and self-defeating. But from inside the moral system it seems natural.” (George Lakoff, “Moral Politics,” pp. 417-418).
The Lakoff quote resonates with me a great deal.  Part of it reminds me of some of the things I wrote about in this post.