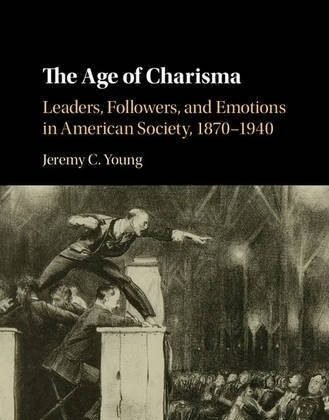 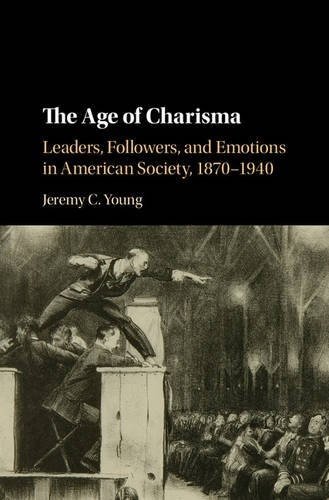 Jeremy C. Young is Assistant Professor of History at Dixie State University in St. George, Utah.  This interview is based on his new book, The Age of Charisma: Leaders, Followers, and Emotions in American Society, 1870-1940 (Cambridge University Press, 2017).
JF: What led you to write The Age of Charisma?
JY: Growing up, I was inspired by politicians from the Gilded Age and Progressive Era such as William Jennings Bryan, Theodore Roosevelt, and Woodrow Wilson; I often wished modern American politics contained such larger-than-life figures.  I came to graduate school wanting to write a hagiographic dissertation about Wilson and the League of Nations, which, well, wouldn’t have been a very interesting book.  My advisor, Michael McGerr, encouraged me instead to think about why I found these figures so inspiring.  After digging through primary and secondary sources, I realized I wasn’t the only one who felt this way about turn-of-the-century leaders.  In the late nineteenth and early twentieth centuries, millions of ordinary Americans had been transformed through emotional connections with politicians, evangelists, and social activists.  This was the real story, I decided: not the leaders who made emotional appeals, but the followers who responded to them and the relationships followers and leaders built together.  Why did Americans of this period experience such profound emotions when interacting with leaders?  What could these emotional experiences tell us about the development of American society and culture?  Those were the questions that motivated my research, and, in the end, I think my book answers them.
JF: In 2 sentences, what is the argument of The Age of Charisma?
JY: The Age of Charisma argues that the modern relationship between American leaders and followers grew out of a unique group of charismatic social movements prominent in the late nineteenth and early twentieth centuries. Drawing on hundreds of letters and testimonials, the book illustrates how “personal magnetism” in public speaking changed the culture of leadership by enabling a shift from emotional remoteness to emotional availability – thereby enhancing American democracy and creating a culture in which today’s leaders appeal directly to Americans through mass media.
JF: Why do we need to read The Age of Charisma?
JY: My book reshapes our understanding of American history in the late nineteenth and early twentieth centuries in a number of ways.  It outlines the origins of the strange, singsong speaking style used by turn-of-the-century leaders and shows how central that style was to American culture.  It offers a fresh interpretation of the Gilded Age and Progressive Era, centered on the unique relationship between leaders and followers of the time.  It uses the testimony of followers to challenge common assumptions about popular civic participation by defining charismatic followership as a meaningful and historically-significant activity.  It demonstrates how individual emotional experience shapes large-scale historical trends.  Finally, it explains why Americans today demand that their leaders shake hands, kiss babies, deliver speeches, and forge emotional connections with their followers – something Americans of the mid-1800s neither expected nor wanted – and why these emotional connections are a positive and necessary feature of American democracy.
JF: When and why did you decide to become an American historian?
JY: While I am in fact an American historian, I tend to think of myself as a writer who works in the field of American history.  I’ve always known that I needed to produce and share creative work in order to feel fulfilled.  When I went to college, my career goal was to become a concert pianist; I decided I needed a backup plan in case I wasn’t successful, so I added a history major.  About halfway through school, I realized two things: I didn’t enjoy practicing piano, which seemed like a bad sign for someone planning a career in that field, and I did enjoy writing history papers. So I switched emphases and focused on history instead, and I haven’t looked back.  I chose American history over other subfields because I wanted my work to have some impact on current events. There is a message about strategies of activism in The Age of Charisma, but you have to work hard to find it; I don’t spell it out in the book.
JF: What is your next project?
JY: I’m currently in the early stages of a book project that will explore nineteenth- and twentieth-century Americans’ fascination with alternate realities.  Over the past hundred and fifty years, a broad swath of Americans have demonstrated a belief in a hidden world beyond the reach of everyday experience – a longing for a secret reality available only to a select few.  This belief in imagined realities has been shared by science fiction authors and religious leaders, philosophers and conspiracy theorists.  At the same time, a number of Americans have obscured their own private realities of trauma through fictitious public performances of gender; burlesque performers, escape artists, con artists, evangelists, and pinup girls have all participated in this type of identity performance.  The persistence of alternate realities, I argue, suggests that a large group of Americans have never accepted or felt comfortable in modern industrial society – and, consequently, that the American social order is far more fragile than we might think.
JF: Thanks, Jeremy!