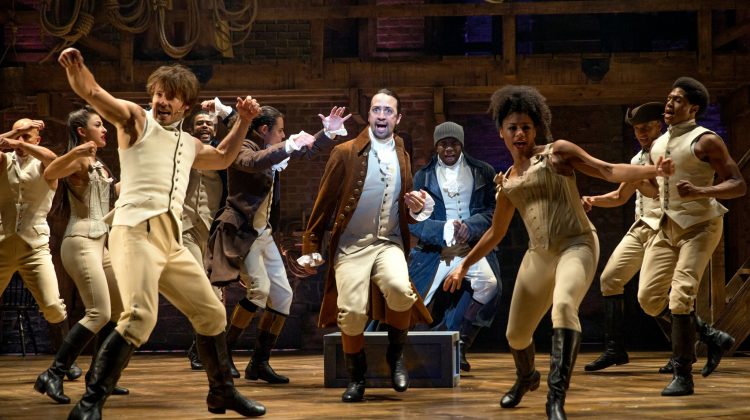 In his review of Lin Manuel-Miranda’s Broadway hit “Hamilton,” Peter Manseau, the new curator of American religious history at the Smithsonian’s National Museum of American History, writes: “Miranda’s ingenious retelling of Revolutionary-era U.S. history studiously ignores common eighteenth-century notions of the role religion should play in society, replacing them with the fully privatized faith of today.”
But wait!  Perhaps religion does play an important role in “Hamilton.”  Civil religion that is.
Here is Manseau again:

Yet despite the play’s stalwart separation of church and founding statesmen, there remains something about Hamilton that strikes a religious nerve: namely, the way that its various canny subversions of the popular imagery of the Founding era ultimately reaffirm the American creation myth. The musical’s off-the-charts popularity stems from more than Miranda’s catchy hooks and inventive lyrics. As Hamilton continues to swell into a bona-fide reflection of the zeitgeist, one underlying factor seems most responsible for its rise: Miranda’s fable of the republic’s founding offers a way to take part in the cult of sacred history without the usual birthright credentials and ritual obeisances. This is no mere hip-hopera; it’s an altar call for would-be patriots previously too burdened by ambivalence to fully embrace the American faith.

The favored avatars of this faith may change with the times, but its creed does not. The birth of the nation remains our One True God. The Revolution, the Constitution, and the Founding Fathers serve as something of a trinity establishing the culture’s unquittable cosmology and incontestable truth. Seen this way, Hamilton is less a new vision of the past than a translation of the sacred stories of American civil religion into the vernacular—in this case, the lingua franca of contemporary pop culture, a mashup of hiphop, R&B, rock, and show tune samples. And like any vernacular rendering of a text considered holy and immutable, it is at once radical on the surface and retrograde underneath—the best example in years of how a dominant worldview adapts to survive social change.