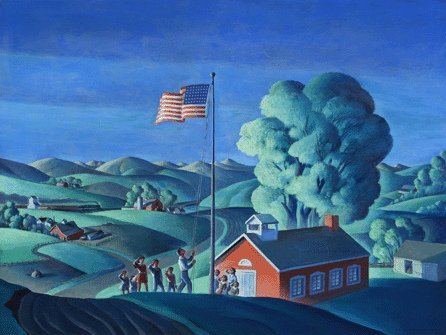 By now many of you have probably read a review of Alan Taylor‘s new synthesis of the American Revolution.  (We will be featuring Taylor in an upcoming edition of the Author’s Corner.  Stay tuned).

A major legacy of the Revolution, he concludes, was the emergence of a society dominated by ordinary middle-class white men, the very people he has most criticized as patriarchal, racist and genocidal. In Taylor’s mind their victory seems to have come at the expense of others. By focusing on common white men, he maintains, the Revolution worked against blacks, Indians and women. The question raised by Taylor’s book is this: Can a revolution conceived mainly as sordid, racist and divisive be the inspiration for a nation?

And here is Eric Herschthal at Slate:

Taylor…gives a central role to women, blacks, and Native Americans in determining the war’s fate. The wives and daughters of Patriot soldiers took over the shops, farms, and slave plantations of those who left to fight. For the first time in their lives, white women became public participants in politics, organizing boycotts and participating in street protests.

Indeed, Taylor’s new book is not your traditional Whig history of the American Revolution.  If the reviews I read are correct, Taylor gives due attention to women, blacks, frontier settlers, and Native Americans, making these groups important actors in the story.  (I discussed, and praised, Taylor’s similar approach to the colonial period in Why Study History? Reflecting on the Importance of the Past).  Since I have not yet read American Revolutions, I don’t know how Taylor covers the so-called “founding fathers.”  I am guessing that few reviewers, especially historians of a progressive bent, will say much about his treatment of these white men.

But for those who have not yet read the book, I think we get a glimpse of how Taylor treats the founders’ ideas from his recent piece at the American Scholar titled “The Virtue of an Education Voter.”

A lot of folks on my social media feeds are criticizing Gordon Wood’s review of the book (perhaps rightly so–Wood writes with his usual crankiness), but in this American Scholar piece Taylor sounds a lot like Wood in The Creation of the American Republic.  Taylor focuses on the role that “virtue” and the common good played in the founders’ thinking, particularly as it relates to their belief in an educated citizenry.  Like Wood, Taylor argues that this kind of self-sacrificial virtue was important to the founders.

But Taylor also writes prescriptively about the founders’ belief in the importance of virtue.   In other words, he suggests that the founders were correct when they called for a virtuous republic built upon an educated citizenry.  He tries to resuscitate these civic humanist arguments and employ them in our current debates over the funding of education.

Perhaps there is more Gordon Wood in Taylor’s book than some reviewers would like to admit.

Here is a taste of Taylor’s essay:

We have come to think and speak of education as primarily economic (rather than political) and individual (rather than social) in its rewards. As a consequence, growing numbers of voters care only for the education of their own children. These conceptual and rhetorical shifts lead legislators to wonder why taxpayers should pay for the education of others—particularly those of poorer means, different culture, or darker color. If only the individual, rather than society as a whole, benefits from education, let the student bear the cost of it: so runs the new reasoning.

During every recession, state governments make budget cuts, and public colleges and universities become the tempting, soft targets. That temptation grows when states feel pinched by rising costs for Medicaid and prisons (places stuffed with the poorly educated). By reducing public support for colleges and universities, legislators and governors induce them to increase the tuition and fees that students pay. A recent report by the Center on Budget and Policy Priorities finds that since the 2008 recession, states have reduced spending on public higher education by 17 percent per student. During the same period, tuition has risen by 33 percent. The University of California system is the largest in the nation. According to the American Academy of Arts and Sciences, the state of California provided a quarter of the system’s budget in 2002. After a billion dollars in cuts, the state now pays for just nine percent of the system’s costs, yet legislators howl in outrage when university administrators admit more out-of-state and foreign students, who can be charged twice as much as in-state students. The same game is playing out in every state.
Increasingly reliant on loans to cover the cost of higher education, students have assumed alarming levels of debt: an estimated $1.3 trillion owed by 42 million Americans. According to the August issue of Consumer Reports, graduates this year average $37,000 in debt per student. The debt burden puts a drag on the overall economy and society, as thousands of graduates delay buying a home or having children. Increasingly, young people from middle-class families question whether attending college is worth the cost.

As a country, we are in retreat from the Jefferson and Peck dream of equal educational opportunity for all. And the future social costs will be high. Proportionally fewer Americans will benefit from higher education, inequality will increase, and free government will become a stage set for opportunists to pander to the prejudices and fears of the poorly educated.

Although the current definition of education is relentlessly economic, the source of the crisis is political. Just as in Jefferson’s day, most legislators and governors believe that voters prefer tax cuts to investments in public education. Too few leaders make the case for higher education as a public good from which everyone benefits. But broader access to a quality education pays off in collective ways: economic growth, scientific innovation, informed voters and leaders, a richer and more diverse culture, and lower crime rates—each of which benefits us all. Few Americans know the political case for education advanced by the founders. Modern politicians often make a great show of their supposed devotion to those who founded the nation, but then push for the privatization of education as just another consumer product best measured in dollars and paid for by individuals. This reverses the priorities of the founders.

Americans lost something valuable when we forsook “virtue” as a goal for education and a foundation for free government. In 1950, a Harvard committee published an influential report titled General Education in a Free Society. The authors wrote that “our society, like any society, rests on common beliefs and … a major task of education is to perpetuate them.” But the report struggled to define the “common beliefs” best taught by modern American universities. In the 19th century, most colleges had promoted a patriotism linked to Protestant Christianity. But in our own century, no one creed seems capable of encompassing the diverse backgrounds and values of American students. We also balk at empowering any public institution to teach a particular political orthodoxy. The sole common ground is a celebration of the university as a “marketplace of ideas,” where every individual can pick and choose her or his values. Secular universities preach just one core value: the open and free investigation of multiple ideas. Liberal education now favors a process of free choice rather than any other particular belief.

We need to revive the founders’ definition of education as a public good and an essential pillar of free government. We should also recover their concept of virtue, classically defined, as a core public value worth teaching. That, in turn, would enable more voters to detect demagogues seeking power through bluster and bombast and pandering to the self-interest of members of the electorate. At the end of the Constitutional Convention of 1787, a woman in Philadelphia is said to have asked Benjamin Franklin what sort of government the delegates had created for the people. He supposedly replied, “A republic, madam, if you can keep it.”