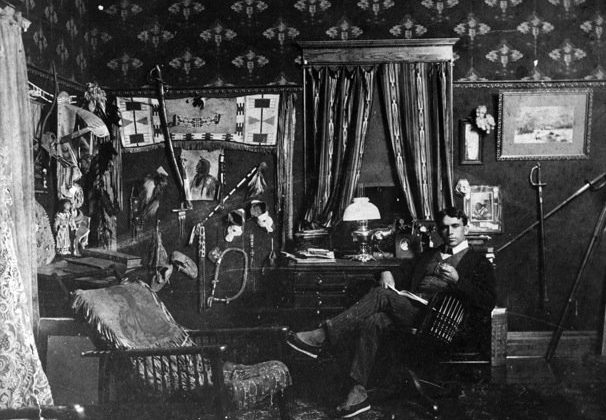 If you’re like me, you know the name Vernon L. Parrington from your graduate-level course in American historiography.  Parrington won the Pulitzer Prize in History in 1928 for his book Main Currents of American Thought.  Post-war students of intellectual history got to know Parrington through Richard Hofstadter’s 1968 work The Progressive Historians: Turner, Beard, Parrington.
But did you know that Parrington was also responsible for bringing college football to Oklahoma?
Here is a taste of Andrew McGregor’s post at Sport in American History:
Football morphed into a formalized campus institution following the arrival of Vernon Louis Parringtonat the University of Oklahoma in 1897. Hired to develop a department of English for the young university, he took on the added unpaid roles of football coach and athletic director. The extra duties were no bother to Parrington, who, like many of the leading Progressive thinkers of the day, viewed sport as an important part of training complete men. Football also played an important role in establishing a university culture. Parrington was intimately tied to both at Oklahoma.
Parrington, who is perhaps best remembered as one of the founders of American Studies, winner of the 1927 Pulitzer Prize for History, and one of Richard Hofstadter’s “Progressive Historians,” embodied Theodore Roosevelt’s “Strenuous Life.” He modeled a form of robust yet genteel masculinity, representing the ideal well-rounded man at the heart of intercollegiate athletics. Oklahoma could choose no better symbol to found their athletic programs.
Like Harts, Parrington came to Oklahoma from Kansas, where he was a professor of English at the College of Emporia. Parrington also coached the “Fighting Presbies” football and baseball teams. His interest in athletics first developed, however, while a youth playing baseball in rural Kansas. Parrington excelled at baseball and nurtured this interest while a prep student at the College of Emporia, likely helping to organize its first baseball team.
In the College of Emporia’s student newspaper, according to historian James T. Colwell, Parrington “urged western colleges to concentrate more on ‘the laurels of the arena’ and less on those of the forum; on athletics rather than oratory.” He focused on both while a student in Emporia, and continued to pursue athletics when he transferred east to Harvard University. Parrington played some baseball while at Harvard, but football caught his eye. “The first [organized] football [game] I ever saw was in Cambridge,” he later remembered. The Crimson were routinely one of the nation’s best teams, providing Parrington the chance to learn the game from the best. While sources disagree on whether Parrington actually played football at Harvard, he certainly studied their methods, bringing them with him back to Emporia.
Read the entire post here.