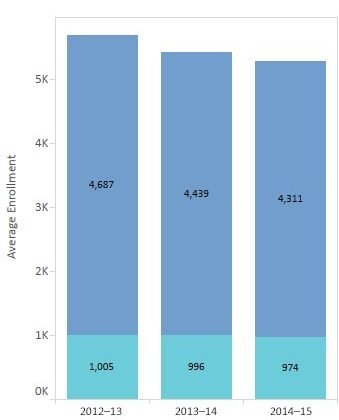 Here is a taste of the latest report from the American Historical Association.
Undergraduate teaching offers many historians their widest audiences, as well as some of the most direct opportunities to maintain the discipline’s presence in the public consciousness. In light of the recent downward trend in the number of history majors (see the March and May 2016 issues of Perspectives on History), and anecdotal reports from some department chairs that overall undergraduate enrollment in history courses has been falling, the AHA conducted an online survey to gauge trends in student enrollment in college history courses.
Conducted this past spring and summer, and targeted at chairs and program administrators from colleges and universities in the United States and Canada, the survey aimed to measure the changing popularity of history courses. Responses show that the total number of college students taking history courses—a broad measure of our discipline’s reach in higher education—has fallen over the past few years. The direction and degree of enrollment changes vary significantly from institution to institution, with public institutions more consistently affected by declines. Initial analysis does suggest, however, that historians at many institutions might be able to support higher levels of student interest in undergraduate history courses with greater outreach and broader faculty participation in recruiting students.
E-mails and postings to the AHA’s Department Chairs community invited more than 800 academic units at a variety of institutions to participate in the online survey. Based on the composition of academic units that elect to be listed in the AHA’s Directory of History Departments, Historical Organizations, and Historians, the survey invitations went disproportionately to administrators in departments at four-year institutions, although the AHA made a parallel effort to recruit responses from units at two-year institutions. Of those who submitted at least some enrollment information, 113 were at four-year institutions in the United States, five were at two-year institutions in the United States, and five were at four-year institutions in Canada. Another 30 respondents began the survey but stopped before submitting any quantitative information. Institutions represented within the category of four-year institutions varied greatly by retention and graduation rates, size, public or private control, types of undergraduate programs offered, location, selectivity, Carnegie classification, and institution level (from baccalaureate-only to PhD-granting). The aggregate number of undergraduate history students represented in responses to this survey was approximately 390,000 in 2012–13 and approximately 360,000 in 2014–15.
From the 2012–13 academic year through the 2014–15 academic year, overall student enrollment in undergraduate-level history courses declined at 96 of the 123 academic units for which we now have data. Total undergraduate student enrollment in history courses rose at only 27 of these institutions. Worryingly, large net declines of 10 percent or more affected 55 of the responding institutions. The median drop in enrollment at public institutions was somewhat higher (9.2 percent) than the median change at private institutions (7.9 percent; see fig. 1). The experience of individual departments in each category, however, varied widely. One private institution saw a 29.8 percent increase in history enrollments, while another saw a 42.1 percent decline. One large public institution’s history enrollment dropped 26.4 percent, while another smaller public institution’s rose by 23.8 percent.
Read Julia Brookins’s entire article here.
What explains this decline.  I have a few hunches:

I addressed other issues related to this crisis in a 5-part series at this blog entitled “What Should Historians Be Thinking About?“