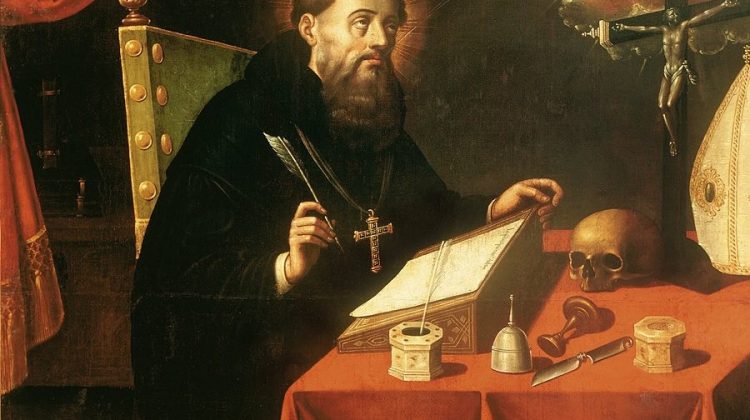 A lot.
Check out Alex Grant‘s piece, “City of God and the Ends of American Politics” at Christ & Pop Culture.”  Here is a taste:
At heart, the Democratic and Republican parties are each giving us a story about identity. Augustine begins his critique of this identity by satirizing some of what we might call the “conservative values” of the Republican party. He argues that we can tolerate corruption in a people and their government as long as “our way of life” is not disrupted:

“So long as it lasts,” they say, “so long as it enjoys material prosperity, and the glory of victorious war, or, better, the security of peace, why should we worry? What concerns us is that we should get richer all the time, to have enough for extravagant spending every day, enough to keep our inferiors in their place. It is all right if the poor serve the rich, so as to get enough to eat to enjoy a lazy life under their patronage; while the rich make use of the poor to ensure a crowd of hangers-on to minister to their pride . . . if provinces are under rulers who are regarded not as directors of conduct but as controllers of material things and providers of material satisfactions, and are treated with servile fear instead of sincere respect. . . .” (II.20, translated by Henry Bettenson)

Does not this desire to maintain riches, glory, and a certain kind of stability contain the echo of “making America great again”? Here is the preservation of class divides, the “freedom” to be good consumers, and a hawkish desire to go to war in order to “protect our way of life” (in our case, isolationism, capitalism, and neglect of social justice). It reveals a people who have found their identity in being “the greatest nation on Earth,” where greatness is defined in measurables, such as economic prosperity and military power rather than true justice and relational human flourishing.
But Augustine is not just concerned with the economic and material desires. He goes on to address the more liberal “identity politics” most often espoused by the Democratic party. Why should we worry, Augustine continues,

if the people applaud those who supply them with pleasures rather than those who offer salutary advice; if no one imposes disagreeable duties, or forbids perverted delights; if kings are interested not in the morality but the docility of their subjects; . . . The laws should punish offences against another’s property, not offences against a man’s own personal character. No one should be brought to trial except for an offence, or threat of offence, against another’s property, house, or person; but anyone should be free to do as he likes about his own, or with his own, or with others, if they consent. (II.20)

Notice that, in this view, consent is all that is required to make an action virtuous. All desires and delights are valid. Here is the argument that it should be possible to do anything one wants, provided that it does not harm others’ property or bodies.
We could stop here, recognizing that both parties have their flaws. But Augustine goes further, linking the desires for unchecked economic prosperity and personal license:

It is a good thing to have imposing houses luxuriously furnished, where lavish banquets can be held, where people can, if they like, spend night and day in debauchery, and eat and drink till they are sick: to have the din of dancing everywhere, and theatres full of fevered shouts of degenerate pleasure and of every kind of cruel and degraded indulgence. Anyone who disapproves of this kind of happiness should rank as a public enemy: anyone who attempts to change it or get rid of it should be hustled out of hearing by the freedom-loving majority: he should be kicked out, and removed from the land of the living. (II.20)

And this is where we reach the ends of what we have been trained to love and value. The link between both parties and ourselves is the supremacy of pleasure. And so the Republican party asks, “Why shouldn’t we do what we want with our money and do all we can to maintain our nation’s power?” And so the Democratic party asks, “Why shouldn’t we fulfill every desire that is in our hearts?” Embedded in both is the same question: Why should we deny ourselves pleasures of any kind, and why should we let anyone disapprove of what we do?
Read the entire piece here.