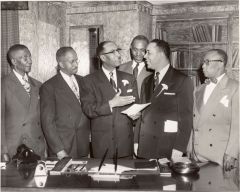 Over at the Black Quotidian blog, proprietor and Arizona State history professor Matthew Delmont calls our attention to a headline in the August 30, 1930 edition of the Baltimore Afro-American:
While much of the bitterness, exposes, and even bloodshed expected to culminate at the Golden Jubilee of the National Baptist Convention was sidetracked, near casualties developed a the election of officers when followers of the Rev. J.C. Austin sought to establish the fact that he had been tricked out of his right to run in the election.  A battle, in which chairs and fists were used, and knives brandished, and women fought with pocketbooks, ended when six policemen, answering a riot call, rushed to the scene.  In twenty minutes order was restored.
I am sure some of my  readers will have a field day interpreting this.