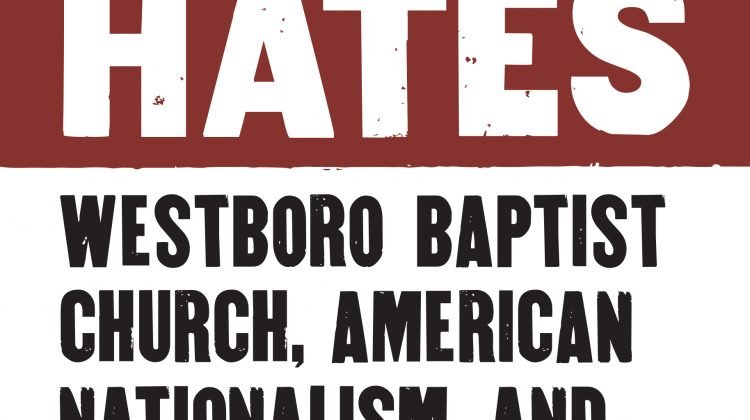 Rebecca Barrett Fox is Visiting Assistant Professor of Sociology at Arkansas State University.  This interview is based on her recent book God Hates: Westboro Baptist Church, American Nationalism, and the Religious Right (University of Kansas Press, 2016).
JF: What led you to write God Hates?
RBF: I graduated from Juniata College, in rural central Pennsylvania, in 2000. During my time there, I was spent a lot of time visiting and observing conservative churches, many of which were very worried with the upcoming turn of the century and Y2K. We giggle at that now, but, at the time, people were concerned enough to stockpile supplies. I knew people buying land in the area and building bunkers and cabins in preparation for the impending end of the world. I found it just fascinating. And so, when I moved to Kansas to pursue graduate school at the University of Kansas, I knew I had to add one of the country’s most conservative and fringe churches to my list of observations. In hindsight, I should have been more intimidated than I was, because the theology was relatively unfamiliar and also because the church is frequently the target of vandalism as well as violence.
I wasn’t prepared for the level of vitriol coming from the pulpit. I’d seen it on the picket line, but I didn’t expect it in sermons, which are, after all, directed at people who presumably share your beliefs. I didn’t understand why someone would keep coming back, and I wanted to figure that out. So, first, this was a project micro in scope, focusing on the interaction of church members and how the church worked. Very quickly, though, I saw the need to put it in the bigger context of American religious history and culture. It is easy to dismiss Westboro Baptists as lone weirdos. But they are actually within a long line of American religionists. Fred Phelps, the founding pastor, liked to say that the church hadn’t changed–America had changed. And he was, to a great extent, right about this. I wanted people to understand that this kind of thinking and behavior didn’t come out of nowhere. I wanted to help people see that none of our beliefs really do, even the ones that seem bizarre.
JF: In 2 sentences, what is the argument of God Hates?

RBF: Westboro Baptist Church, a church of under 100 people, nearly half of them children, has outsized influence on conversations on how Christians do and should engage with questions of queer sexuality and LGBTQ rights–and not because they are so loud, media savvy, and resilient (though they are). The part of this book that is about Westboro Baptist Church is interesting (especially for those of us who geek out on religious history and theology), but the more important part is about how people who see themselves as much more civil, kind, faithful, and loving respond to Westboro by invoking a more civil and kind but, in the end, just as damning, rejection of LGBTQ people.
JF: Why do we need to read God Hates?
RBF: Westboro is often used as a foil by Christians who do not want to fully welcome or include queer people in civil or religious life, people who say, “We’re not like those Westboro Baptists” but can do even more harm to LGBT people because they are more respected in our society. Every Christian who sniffs at Westboro and says, “They’re not a REAL church” or “They’re not REAL Christians” should read this because, I hope, the book lays out the argument that Westboro Baptists occupy a line in America Christianity that is very old and that continues to share much in common with more mainstream Christianity.
I hope, too, that the book humanizes the members of Westboro Baptist Church, many of whom are kind, gentle, generous people who genuinely believe they are doing the work of God. These two parts of the story–that this church is not unique in American history but rooted in it and that its people are, by and large, wonderful, with the huge exception of when they are absolutely terrible–is a reminder to me that it is very easy for many of us to do awful things in the name of our religious traditions. Many of us hold opinions and prejudices that hurt people–we’re just not as committed to living them out as Westboro Baptists are. I hope this books helps some of us to be a bit more self-aware.

JF: When and why did you decide to become a scholar of American religion?

RBF: The summer between fourth and fifth grade. I’m fairly sure it was just to get out of the house, but my mother sent my siblings and me to every Vacation Bible School in a 15 mile radius. I hated Vacation Bible School, but I was intrigued by why there were so many different churches in a place that seemed so homogenous. (Of course, I didn’t know the word “homogeneous” at the time. I just knew that some of my friends were Methodists and some Presbyterian and some Mennonite and that they were all my friends but went to churches that saw themselves as distinct.) I was at VBS at Middle Octorara Presbyterian Church, which had been founded in 1727, and I thought, “I want to know why people have been going to this church for 250 years.”

RBF: I’m working with Dr. John Shuford, the director of the Hate Studies Policy Research Center, to edit The Encyclopedia of Hate: A Global Study of Enmity, Forgiveness, and Social Change, which will provide an overview of the major hate groups operating in the world today as well as essays on the state of hate studies today. I’m also editing a special issue of The Journal of Hate Studies, which is housed at the Institute of Hate Studies at Gonzaga University. My focus remains on religion and hate–specifically in conservative and fringe Christian groups, with an interest in gender and sexuality. For example, I’m currently an investigator on a grant from the National Institute of Justice to study the online presence of the Army of God, a violent anti-abortion effort. My next book-length project will focus on the place of women and families–and especially white womanhood–in religiously-inspired hate groups and extremist movements. And I remain interested in how those extremist groups overlap with more mainstream groups, especially in theology and politics.
JF: Thanks Rebecca!