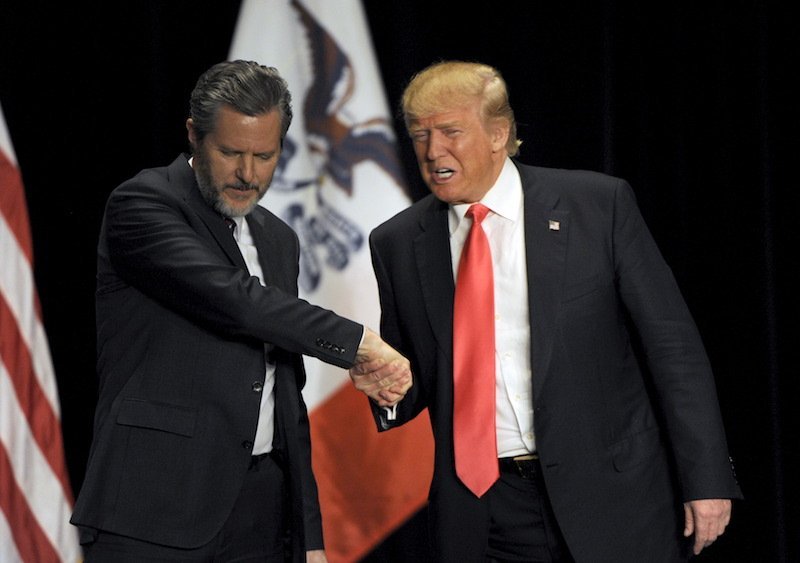 Jerry Falwell Jr. is still riding the Trump Train.  This time he has turned to the op-ed pages of The Washington Post to make his case for the GOP nominee.  The talking points are the same. Falwell Jr. chides Barack Obama, Hillary Clinton, and the Democratic Party for their missteps, but he does not make a positive case for his candidate apart from the dubious historical analogy that Trump is the next Winston Churchill.  He warns that if we don’t vote for Trump we will all suffer “dire consequences.”
I am not sure what Falwell Jr. thinks he is doing.  Does he think that his endorsement of Donald Trump is going to help make Liberty University the world-class evangelical institution that he and his father, Jerry Falwell Sr., envisioned?  I know, I know, he claims that his endorsement of Trump is personal and he is not  making it on behalf of Liberty University.  That’s all well and good on paper, but I doubt most Americans grasp the subtle distinction.  In the past six months I have talked with three parents who said that their kids chose another school partially based on Falwell Jr.’s support of Trump.  Two of them were the parents of high school seniors and the other one was the parent of a student who is transferring to another college this Fall.  Three parents hardly make a movement. Perhaps these three parents are not representative of most Liberty parents.  Or perhaps they are more representative of the kinds of evangelicals with whom I engage in political conversation.  But all three of them were troubled by Falwell’s endorsement and the politicization of evangelical faith taking place on the Liberty campus.
It is easy to criticize the president of the largest Christian university in the country for throwing his support behind a serial liar, a nativist, a race-baiter, and an adulterer.  But let’s consider the fact that Falwell Jr. is also the president of a Christian university. Universities are places of learning.  They are places where students try to see the world from the point of view of others and engage unfamiliar viewpoints with graciousness and respect.  They are places where students learn to think and make arguments based upon credible evidence.  They are places where students learn to listen before casting moral judgement, where they learn to exercise restraint in their speech, and where they learn that the answers to some of society’s most pressing questions are often complex and thus require nuanced thinking.  Donald Trump’s presidential campaign represents none of these things.  Yet he has won the endorsement of a president of a university!
Frankly, I wonder just what kind of authority Jerry Falwell Jr. actually has to shape the opinion of evangelical voters.  Most of the Liberty students I have met, talked with, or engaged via social media (and I confess that I have not spoken to many, maybe about a dozen or so) do not support Donald Trump (or at least did not support him during the GOP primaries).  In the Virginia primary Trump finished fourth  in Liberty’s precinct. Liberty’s student body president and vice president supported Marco Rubio.
I am guessing that many Liberty students and employees who backed another candidate in the primaries have now turned to Trump because of his promise to deliver the Supreme Court.  But I doubt that they made this decision because of Falwell Jr.’s endorsement.
So again I ask, who is listening to Jerry Falwell Jr.?  Are there people who take his political opinions seriously?  It seems as if his endorsement of Trump is doing more harm than good to Liberty University.