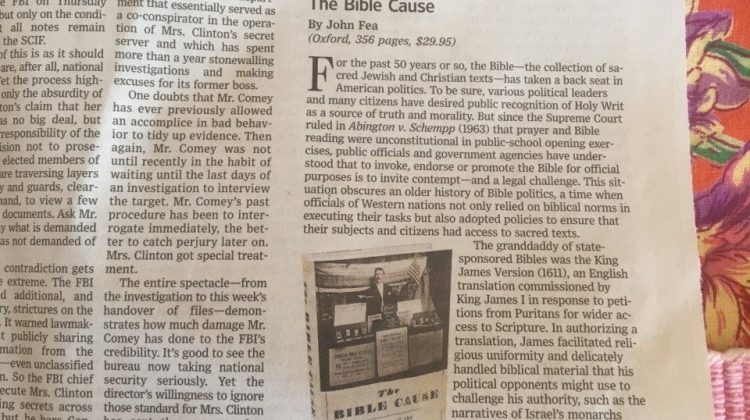 Check out Darryl G. Hart’s review of The Bible Cause: A History of the American Bible Society in today’s Wall Street Journal!
Here is a taste:

For the past 50 years or so, the Bible—the collection of sacred Jewish and Christian texts—has taken a back seat in American politics. To be sure, various political leaders and many citizens have desired public recognition of Holy Writ as a source of truth and morality. But since the Supreme Court ruled in A bington v. Schempp (1963) that prayer and Bible reading were unconstitutional in public-school opening exercises, public officials and government agencies have understood that to invoke, endorse or promote the Bible for official purposes is to invite contempt—and a legal challenge. This situation obscures an older history of Bible politics, a time when officials of Western nations not only relied on biblical norms in executing their tasks but also adopted policies to ensure that their subjects and citizens had access to sacred texts.

The granddaddy of state-sponsored Bibles was the King James Version (1611), an English translation commissioned by King James I in response to petitions from Puritans for wider access to Scripture. In authorizing a translation, James facilitated religious uniformity and delicately handled biblical material that his political opponents might use to challenge his authority, such as the narratives of Israel’s monarchs that feature divine judgment for abuses of royal power. Yet in shoring up his rule, James also put his stamp on the English-speaking world. For more than three centuries the KJV was unrivaled in use on both sides of the Atlantic by politicians (think William Wilberforce) and church leaders (remember Billy Graham?).

Readers unfamiliar with this intertwined history of politics and proselytizing may regard the cover of John Fea’s “The Bible Cause,” which features a man holding a Bible in one hand and waving a U.S. flag with the other, as nostalgic, creepy or worse. The man pictured is an agent of the American Bible Society (ABS), the organization whose history Mr. Fea narrates from its founding in 1816 to its bicentennial celebration this year. The society’s initial goal was to place a Bible in every American home, a target that prompted four major printing and distribution campaigns as the nation’s population grew during the 19th century. ABS also sent Bibles overseas: Between 1875 and 1916, it distributed roughly 21 million copies among the Chinese. Even so, the ties between the wide distribution of the Bible and America’s evolving self-definition are much stronger than even the cover’s image suggests.

The rest of the review is behind the Wall Street Journal paywall, but if you really want to read it (and I know you do!) head to your local news stand and pick-up a copy.

Hart asks a brilliant question–one that I wish I had thought about.  “What happens when you take something that is special and make it ubiquitous? In other words, to what degree did ABS operations render a holy book trivial?”