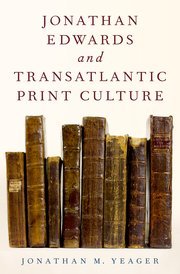 JY: I enjoyed researching and writing the last two chapters of my first book on the Scottish Presbyterian minister John Erskine (1721-1803). In these chapters, I discussed how Erskine helped disseminate and publish the works of several evangelical authors, including many of Jonathan Edwards’s posthumous books. While conducting research for these chapters, I benefited greatly from reading Richard Sher’s seminal monograph, The Enlightenment and the Book: Scottish Authors and Their Publishers in Eighteenth-Century Britain (Chicago, 2007). Because Sher’s book was devoted exclusively to secular and theologically liberal Scottish Enlightenment authors, I thought that I might be able to make a scholarly contribution on eighteenth-century evangelicals and publishing. I discovered that no one has ever written on the history of Jonathan Edwards’s publications, and so I started to write an article on how his major works were published in the eighteenth century. I amassed so much material on Edwards’s publications–especially on the various people behind the scenes who helped publish his works–that I decided to write a full-length monograph on this topic.

JF: In 2 sentences, what is the argument of Jonathan Edwards and Transatlantic Print Culture?

JY: I make two major arguments that can be summarized as the following: First, even though Jonathan Edwards can rightly be described as a theological genius and the foremost American revivalist of the eighteenth century, much of his success was dependent on a host of booksellers, printers, and editors who helped publish his works before and after his death. Second, evangelicals like Edwards cared how their books appeared in print, even thought they worked harder at disseminating their works for evangelistic purposes than making profits from their publications.
JF: Why do we need to read Jonathan Edwards and Transatlantic Print Culture?

JY: There has been a lot written about Jonathan Edwards. But nearly all the scholarship has focused on his life and thought. In order to have the fullest understanding of Edwards and other eighteenth-century authors, we need to examine the publishing history of their books. I want readers to see that Edwards’s ideas were packaged in a particular format, with various options in sizes, bindings, paper and font quality, and pricing that made a difference in the reception of his works. More importantly, a number of people, acting as booksellers, printers, and editors, made most of the decisions on how Edwards’s books should appear in print and how they should be marketed to the public. Edwards had a definite idea on how he wanted his books to look, but he did not know the best way to have them published so that they would be appealing to the public (without giving too much away, I show this in a few case studies within my book). Knowing all this to be true, I argue that we need to take a closer look at how individuals such as these contributed to his success as an internationally-recognized author.

JY: In 1998, I graduated with an undergraduate degree in business administration and then went on to work as a financial consultant for five years with two different brokerage firms in Florida. About halfway through my time as a broker, I became disillusioned with the business and began reading a lot of books on church history and theology. With my wife’s blessing, I resigned from my job in 2004, sold our house, and moved my family to Vancouver, Canada to study theology at Regent College. At the time that we moved, I simply wanted to gain more knowledge about Christianity. I was having so much fun in Vancouver learning about my faith, snow skiing, and hanging out with friends from multiple denominations all over the world, that after finishing a MA in Christian Studies, I stayed for an additional ThM degree in theology. In my last year in Vancouver, I began corresponding with David Bebbington, who helped me with a thesis that I was working on at Regent College under J. I. Packer. Later that same year, I was able to meet Bebbington in person, and he and I talked about studying history with him in Scotland. After much thought and prayer, my family and I decided to move to Scotland in late 2006 to begin my PhD. My time in Vancouver and Scotland highlight my twin interests of theology and history. I feel very fortunate to have a job that allows me to do research and teach in both fields.

JY: My immediate plan is to write an article on the publication of Samuel Hopkins’s System of Doctrines (1793). This mammoth two-volume book by Edwards’s disciple became the first systematic theology of the so-called New Divinity movement, and helped shape the next generation of Edwardseans. After this project, who knows.
JF: Thanks, Jonathan!