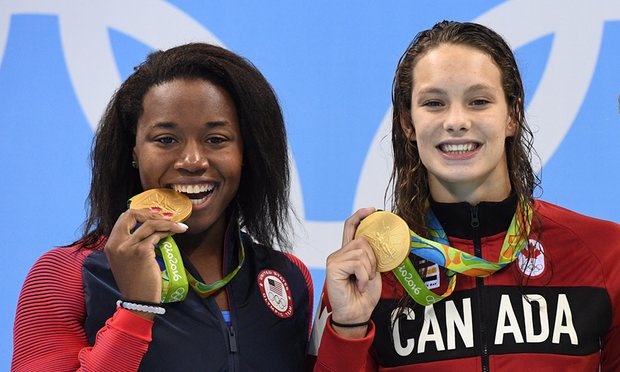 With her stunning and surprise co-victory in the 100 freestyle last night (take THAT, Australia!) Simone Manuel became the first African-American female swimmer to win an individual Olympic gold medal.
After watching Manuel swim my mind eventually went back to a piece I heard on National Public Radio in 2008 about the history of segregated swimming pools in the United States. I did a quick Google search and found Rachel Martin’s interview with Jeff Wiltse, a history professor at the University of Montana and author of Contested Waters: A Social History of Swimming Pools in America.
Here is a taste of that interview:
MARTIN: So, Jeff, you wrote that, in the late 19th century and early 20th, municipal pools, city pools, weren’t built, just weren’t built in African-American neighborhoods in the same way, or at the same rate that they were in other neighborhoods. Then things seemed to shift in the ’20s and ’30s. Pools were segregated, but separate-but-equal wasn’t really equal. Right? Talk about how those pools varied. What were the differences?
Dr. WILTSE: OK, well, first let me address what you brought up initially, which is that, during the late 19th and early 20th century, cities throughout the northern United States built lots of pools in poor, immigrant, working-class-white neighborhoods, but conspicuously avoided building pools in neighborhoods inhabited predominately by black Americans.
And then in the 1920s and 1930s, there was a pool-building spree in the United States. And there were thousands, literally thousands and thousands of pools that were opened up in the 1920s and 1930s, and many of them were large, leisure-resort pools. They were – some of them – larger than football fields. They were surrounded by grassy lawns, and concrete sundecks, and

they attracted literally millions and millions of swimmers.
And yet, it was at that point in time that cities began to racially segregate pools throughout the north, and it then extended, obviously, all throughout the United States. And black Americans were typically relegated, if a pool was provided at all, to a small indoor pool that wasn’t nearly as appealing as the large, outdoor resort pools that were provided for whites.

And so, take the city of St. Louis. In St. Louis, black Americans represented 15 percent of the population in the mid-1930s. But they only took one-and-a-half percent of the number of swims because they were only allocated one small indoor pool, whereas white residents of St. Louis had access to nine pools. Two of them were the large resort pools that I’ve been describing.
MARTIN: Hm. And you have written about some specific instances where there was some real violence surrounding these swimming pools, when black people would try to access these white pools. Can you tell us about some of those incidents, specifically in Highland Park?
Dr. WILTSE: Yeah, sure. So, there were two ways in which communities racially-segregated pools at the time. One was through official segregation, and so police officers and city officials would prevent black Americans from entering pools that had been earmarked for whites. The other way of segregating pools was through violence.
And so, a city like Pittsburgh, it did not pass an official policy of racial segregation at its pools. But rather, the police and the city officials allowed, and in some cases encouraged, white swimmers to literally beat black swimmers out of the water, as a means of segregating pools, as a means of intimidating them from trying to access pools. And so there was an instance, well, there was a series of instances over two summers in Highland Park pool, when it was first opened in 1931…
Read the entire interview here.