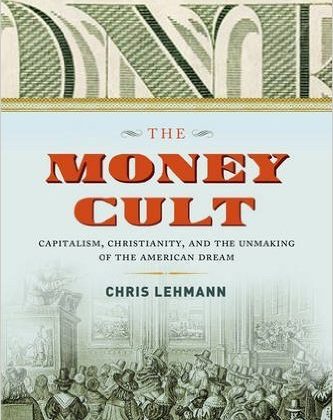 I recently finished reading Chris Lehmann’s The Money Cult: Capitalism, Christianity,and the Unmaking of the American Dream. I have been a fan of Lehmann’s writing for some time now. A former graduate student in history at the University of Rochester where he studied under the late Christopher Lasch, Lehmann is now the editor of the The Baffler,  a journal of cultural criticism steeped in economic populism of the left-leaning variety.
I have been reading the Baffler for about fifteen years, ever since I taught Thomas Frank‘s book The Conquest of Cool: Business Culture, Counterculture, and the Rise of Hip Consumerism in a senior honors seminar on the history of American consumer culture. (Frank, who many may know for his book What’s the Matter With Kansas?, founded the journal).  I also appreciated Lehmann’s review of my friend Eric Miller’s biography of Lasch, Hope in a Scattering Time. So when I learned that Lehmann was writing a book about Christianity and capitalism I rushed to my nearest Barnes & Noble on the night before a vacation to Maine and bought the only copy in the store.
At some point I hope to do an extended review of The Money Cult, but I feel like I need to read it again before that happens.  It is a deeply challenging book.  Lehmann is a public intellectual who has taken the time to steep himself in the historiography of American religious history.  He clearly has an axe to grind against capitalism, and he sometimes fails to take Christianity seriously as a set of beliefs that motivate people to act in the world, but in the end he does a masterful job of showing the links between Christianity, capitalism, and the brand of Gnosticism that often disguises itself as American individualism.
I thought about Lehmann’s book as I read through Part 3 of Timothy Gloege’s series on “corporate evangelicalism” at The Anxious Bench blog.  Some of the readers of The Way of Improvement Leads Home will recognize Gloege from his book Guaranteed Pure: The Moody Bible Institute, Business, and the Making of Modern Evangelicalism.  (Back in June 2015 Gloege visited The Author’s Corner to discuss it).  Lehmann’s chapter on fundamentalism does not cite Gloege, but it would be much stronger if he had. Much of Gloege’s work, both in Guaranteed Pure and his Anxious Bench series, confirms the idea that American evangelicalism has been deeply shaped by market forces.
Here is a taste of Part 3 of Gloege’s “The Crisis of Corporate Evangelicalism”:
Imagine a world where families operate like corporations. Parents are management, but efficiency and profitably determine all aspects of family life. Children are both assets and employees;

resources are allocated according to potential. And if things don’t work out with a troublesome teen or toddler? Well, you can send them packing, no harm, no foul. Children too can move to another family or negotiate with their parents for bedroom upgrades, extended curfews, and increased
allowance.
That disconcerted feeling you have right now? It’s probably similar to what an antebellum Protestant would experience encountering corporate evangelicalism. Never mind whether market-driven families are good or bad, it simply feels unnatural, right? Yet most evangelicals don’t think twice about “church shopping” based on programs, amenities, and “personal fit,” or devoting substantial portions of church budgets to the praise and worship industrial complex, or farming out the development of Vacation Bible School curriculum to an unknown corporation, or discarding a denominational affiliation like last year’s skinny jeans. It’s just what you do.
There is nothing intrinsically natural or unnatural about corporate evangelicalism. Religion is no less immune to business influence than family is to science, or business itself is to family. But such borrowings are not inevitable either. Some stick, others never take. They are, in other words, historically contingent, and as such they beg for an explanation.
Read the rest here.