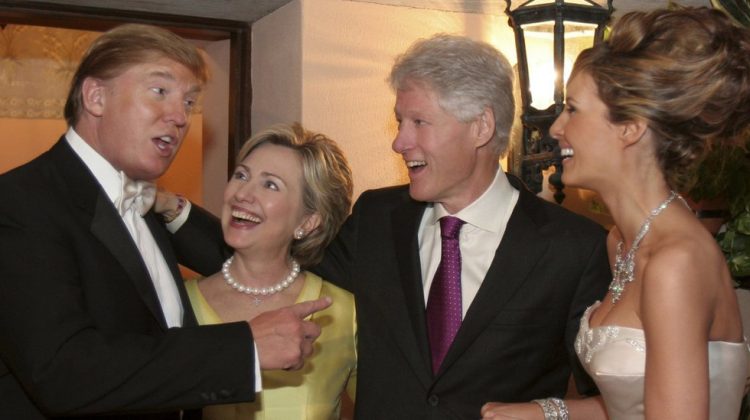 James Dobson made a strong case for the moral character of the President of the United States during the Clinton impeachment crisis in 1998.  You can read about it here.
So did Wayne Grudem.  You can read about it here.
It has now been well-chronicled that Dobson and Grudem have come out in support of Donald Trump’s presidential candidacy.
So does moral character still matter?
Writing at The Atlantic, Jonathan Merritt calls attention to what seems to be the hypocrisy of these “Trump-Loving evangelicals.” He demands that “Trump-loving evangelicals should either apologize to Bill Clinton or admit, after all these years, that they too, have a character issue.”
He adds:
“Character counts.” That was evangelicals’ rallying cry in their all-out assault against Bill Clinton beginning in 1993. In response to what they perceived as widespread moral decline, some religious groups had become aligned with the Republican Party during the Ronald Reagan and George H.W. Bush administrations. To them, the allegedly draft-dodging, pot-smoking, honesty-challenged womanizer symbolized everything that was wrong with America.
More than two decades after Clinton’s first inauguration, many evangelical leaders of that era have endorsed the draft-dodging, foul-mouthed, honesty-challenged womanizer named Donald Trump for president. Only a handful refuse to follow suit, including Albert Mohler, the president of The Southern Baptist Theological Seminary. During the Clinton years, he regularly argued in mainstream media outlets that the Arkansan was morally unfit to serve as Commander-in-Chief.
“If I were to support, much less endorse, Donald Trump for president,” Mohler says, “I would actually have to go back and apologize to former President Bill Clinton.”
At least Mohler is consistent, which is more than can be said for some of his peers in leadership. While prominent evangelicals tied Bill Clinton to the public whipping post for nearly a decade to make him pay penance for his character defects, they now celebrate a reality-television star who is at least as flawed. As Mohler said, if these Christian leaders want to endorse Trump, they should apologize to Bill Clinton…
…Evangelicals during the ’90s were not merely concerned with Clinton’s private behavior; they were worried about its effect on a society they felt had already abandoned traditional values. In September 1998, James Dobson of Focus on the Family sent a letter to 2.4 million conservative Christians claiming Clinton should be impeached because his behavior was setting a bad example for our children about “respecting women.” Dobson’s apparent concern for women back then feels like a partisan political move now that he’s given Trump an enthusiastic endorsement.
While Clinton, at least, hid his indiscretions, Trump has paraded his affairs down Broadway for decades. In The Art of the Deal, Trump actually bragged about bedding multiple married women. He’s slept with so many women that he called his ability to avoid STDs “my personal Vietnam.” He’s objectified or insulted the women he hasn’t married, divorced, or slept with, labeling those he finds unattractive with terms like “fat pig,” “dog” or “slob.” In numerous interviews with Howard Stern, he talked in graphic detail about his sexual exploits and discussed which female celebrities are worth a “bang.” How exactly do evangelicals reconcile this behavior with claims that they value respect for women?
Read the entire piece here.
OK, now some thoughts for my evangelical and Christian readers:
There have been a lot of arguments in the evangelical community about whether one should or should not support Trump.  As I argued yesterday, the pro-Trump argument centers on his promise to appoint conservative Supreme Court justices. But I hear very little conversation within evangelical circles about how support for Donald Trump impacts Christian witness in the United States and beyond.  No one is talking about how a Trump-loving evangelical bears testimony to his or her faith with unbelievers.  (Last time I checked evangelism was a fundamental tenet of evangelical belief).
Whether we like it or not, or whether it is fair or not, we live in an age when religious conviction and politics are closely linked in the minds of many Americans. If you are an evangelical who supports Trump you are going to have a lot of explaining to do when unbelieving friends and acquaintances ask you how you claim the name of Jesus Christ and still affiliate with the immoral candidate that Merritt describes above.  Somehow I don’t think “well, Hillary is a lot worse” or “we need to win the Supreme Court” is going to be an adequate answer.