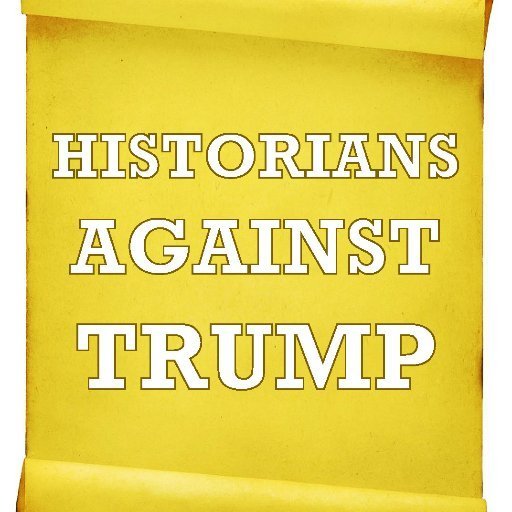 The debate over whether historians should sign a letter opposing Donald Trump’s POTUS candidacy has received a lot of attention.  (See our coverage here).
A few of these conversations took place yesterday on my Facebook page.  I asked some of the historians who wrote on my page for permission to publish their thoughts here at The Way of Improvement Leads Home.
John Haas, Bethel College (IN):
Back in the 1920s and ’30s sociologist William F. Ogburn was on the war path trying to discredit the notion that social scientists should be engaged with the present at all in their professional work. His strongest argument, it seems to me (if I recall correctly) was that taking stands on contemporary controversies would politicize their work, and ruin their reputations as objective scientists generally.
The problem, to get back to your specific question, is that in a democratic society history will be used to justify numerous courses of action to the people, and it’s the “lessons of the past” that the people are interested in. Politicians and pundits will generate and disseminate them, using them for their purposes, even if we won’t.
We can sit back and say, “Well, it’s far more complicated than that,” or “The discontinuities with the past outweigh continuities, rendering those ‘lessons’ dubious,” or just, “Read my book,” but the people have no patience for that. And who can blame them? The enlightenment dream of an educated and virtuous republic never imagined that the attainment of reliable knowledge upon which policies would then be constructed would be such a difficult, immense, contentious and ambiguous task. It takes years of full-time devoted study even to a corner of the field before you really start to know anything. The public can’t do that, and without doing it, they have a very hard time judging among contending voices.
If historians drop into the political realm, they run the danger of being dismissed as mere partisans. (Andrew Bacevich is a great example–theologically and politically conservative, his reputation among his fellow conservatives was trashed when he came out for Obama in 2008. The intense tribal-loyalty dynamics of contemporary politics makes this almost unavoidable.) But, on the other hand, if historians won’t speak up, others will, spinning out “lessons of the past” to suit their agendas, and the people, hearing no other voices, will begin absorbing those “lessons.”
It’s not particularly helpful to say so, but never mind: When we do this–if we do it–it needs to be done really well. Put simply, too many historians sound like any other partisans when they’re weighing in on political issues. I believe we need to stick to our guns: Use a scientific, positivist literary style–unemotional, grounded in facts (especially statistics), etc.–and simply hammer the conclusion in place. Jettison adjectives. Kill anything that even shows the promise of becoming a darling. Be as careful in formulating “lessons” as in determining matters of mundane fact. Practice, in other words, the virtues of professional restraint.
I’m not, to be honest, convinced we’re up to the task. But I think there’s no alternative. The stakes are too high.
Katy McDaniel, Marietta College (OH):
This is a great exchange. To my way of thinking, historians should not *routinely* publicly comment on specific political candidates in a campaign season in this fashion. However, there are times, there are times. And in these times, I think we historians bear the responsibility of informed commentary, of recognition and identification of dangerous demagoguery, even in such a direct manner: that’s a part of our jobs as historians in a democratic society. Otherwise, our silence makes us complicit in what would surely prove to be a disastrous shift in our country, perhaps even away from democracy. This is not hubris; it is responsibility.
Bill Kerrigan, Muskingum College (OH)
I find this whole argument that historians, as historians, “should not” publicly express their views on national politics bizarre. The implicit assumption is that voters need to be protected from such speech because they might be unable to assess the validity of the arguments the historians are making. But of course we know that voters reject arguments and evidence presented all the time. Sometimes for sound reasons, sometimes because they are simply not open to considering perspectives that challenge their already firm beliefs. Fish’s argument, it seems to me is really just another variant on the one that tries to silence a celebrity, for example, for expressing a view on politics, on the grounds that their profession does not qualify them to have any particular insight. Collectively, these types of arguments are harmful because they discourage people from all walks of life from being engaged in the public square. They encourage political apathy, and are I believe, a threat to democracy. Let a group of historians present their view as historians. Let dissenting historians present their own counterviews. Let soap opera stars, and minimum wage workers, and plumbers, and housepainters, and hedge fund managers all publicly present their views. Surely each comes to the table with a distinct perspective that can contribute to the debate. And trust ordinary citizens to listen and read them all, hopefully with a critical but open mind. Let’s stop telling people, or groups of people, that publicly expressing political concerns is a form of hubris. It is fundamentally an anti-intellectual, anti-democratic argument to make.