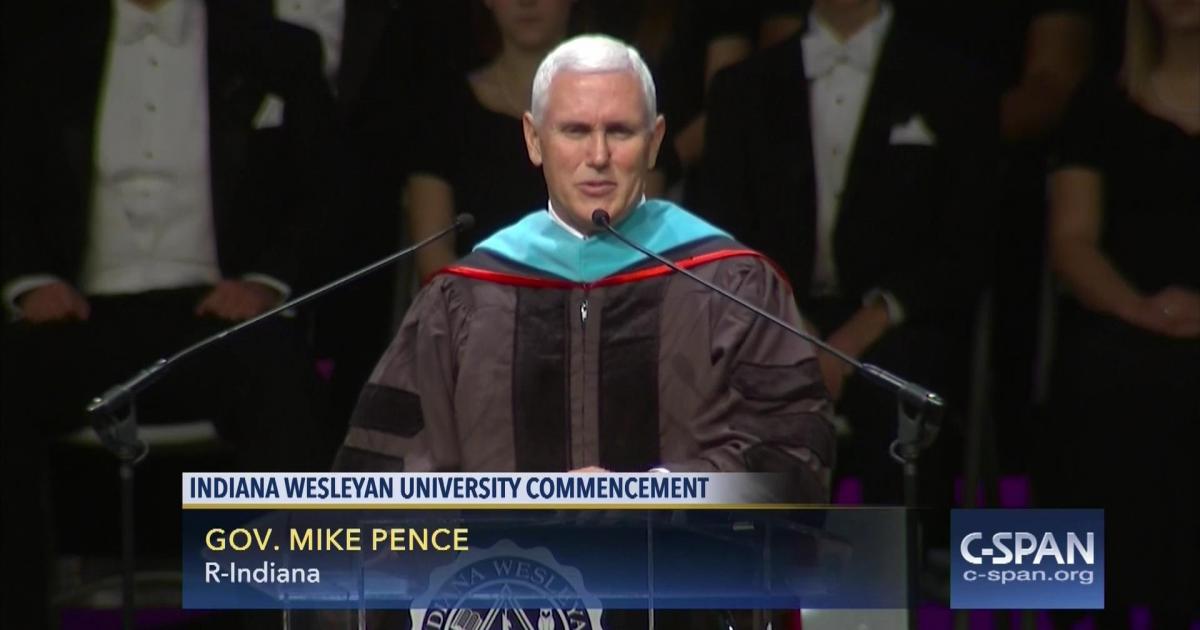 About ten minutes ago I posted a link to a video of Mike Pence’s 2016 commencement address at Indiana Wesleyan University (IWU).  Earlier today I got some more context about Pence’s visit from an IWU insider.
Mike Pence was the commencement speaker here at Indiana Wesleyan University last spring.  It was a pretty standard commencement address with some religious fare tacked on the end for the evangelical audience.  But the surprising thing about Pence’s appearance to me was how much of a ruckus it stirred among the students.  There was a sizeable contingent who were deeply troubled by the university extending an invitation to Pence.  The reasons students cited fell into three major lines of complaints, each of which the students rooted in their faith: 1) Pence’s signature on the Religious Freedom Restoration Act was seen by students as discriminatory, unloving, and un-Christlike.  2) Pence’s refusal to allow Syrian refugees into Indiana was seen by students as a horrible Christian witness and counter to the biblical mandate of welcoming the stranger; 3) Pence’s passage of legislation that redistributed funding for public schools meant to lower-income communities like we have here in Marion saw sharp cuts in school budgets. Students saw this as anything but caring for the least of these. (Our county in Indiana already has the highest rate of childhood poverty in the state, so diminished public funding for the schools didn’t go over well).
University administrators were bracing for a protest during the commencement address. They actually warned the faculty that they had heard rumors that some students were planning and reminded us that CSPAN was going to be filming so we should stay calm if anything occurred.  In the end, the students were very respectful.  Because of all the drama in the run-up to the commencement there were some who wanted to make sure they showed support for Pence and gave his address an immediate standing ovation.  I’d estimate that about a quarter of the students did not stand up.
What does any of this say about evangelicals support for Trump now that he’s picked Pence as a running mate?  I have no idea.  But I thought it was interesting that even within this evangelical university there are a sizable group of students who don’t agree with Pence’s politics on religious grounds. For what it’s worth.