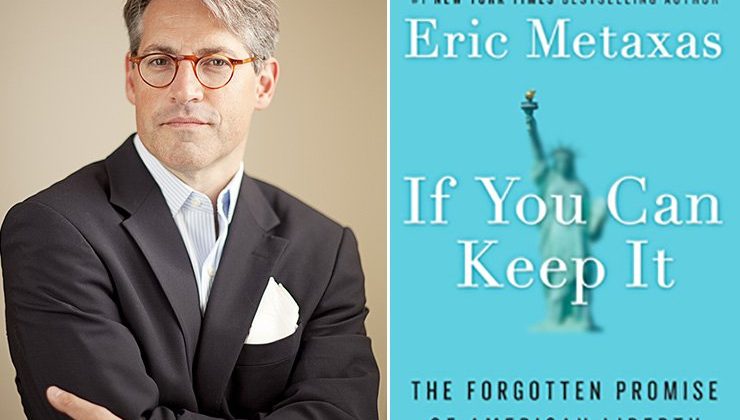 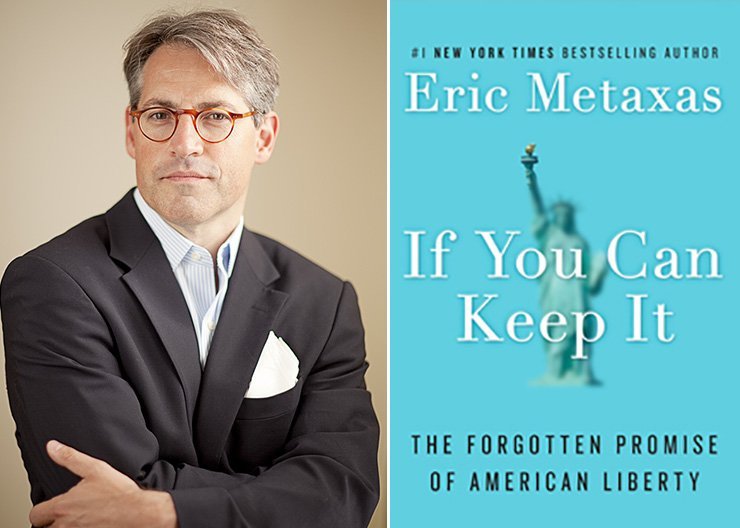 We are in the midst of a short series on Eric Metaxas’s new book If You Can Keep It: The Forgotten Promise of American Liberty.

This post, our final one in the series, examines Metaxas’s understanding of American exceptionalism, an idea that drives much of his thesis in If You Can Keep It.

Metaxas roots his understanding of American exceptionalism in the famous words of John Winthrop, the first Puritan governor of the Massachusetts Bay Colony. In his lay sermon A Model of Christian Charity (1630), Winthrop used the phrase “city upon a hill” to describe the colony.  The phrase comes from Jesus’s words in Matthew 5:14-16: “You are the light of the world. A city set on a hill cannot be hid. Nor do men light a lamp and put it under a bushel, but on a stand, and it gives light to all in the house. Let your light so shine before men, that they may see your good works and give glory to your Father who is in heaven.”

Here is how Winthrop used the phrase in A Model of Christian Charity:  “For we must consider that we shall be as a city upon a hill.  The eyes of all people are upon us. So that if we shall deal falsely with our God in this work we have undertaken, and so cause Him to withdraw His present help from us, we shall be made a story and a by-word through the world…”

It is worth noting that Metaxas has made the common mistake of taking Winthrop’s words, which were addressed to the inhabitants of one British-American colony, and applying them to the United States writ-large.  Winthrop, of course, was not applying his “city upon a hill” metaphor to the already-existing colonies of Virginia, Plymouth, and the Dutch colony of New Netherland (which became New York thirty-four years later).  Yet these colonies and several others–colonies in which the “city upon a hill” metaphor was not part of their founding ideal–would also be part of the United States of America in 1776.  Metaxas is in good company here.  John F. Kennedy and Ronald Reagan, both fans of the “city upon a hill” metaphor, also made this mistake. (More on Reagan below).

At the heart of Metaxas’s argument in If You Can Keep It is the idea that America remains a “city upon a hill” today.  It is, and always has been, a nation chosen by God to do His will in the world.

Here are some pertinent passages from the book:

p.188-189: In speaking about the United States as a “chosen” nation akin to Israel in the Old Testament, Metaxas writes: “So far from being a selfish idea, it is the idea of living for others–of showing them a new way of thinking–that was at the heart of America.  To miss that is to miss everything.  This idea of being as a ‘city upon a hill’ that can be seen from afar–and that will be seen from afar–has been with us from the beginning.  It is the idea that what we have is indeed something extraordinary, but because of this we have been given the tremendous burden of stewarding and sharing what we have with the rest of the world. So if we are exceptional, we are not exceptional for our own sakes.  We are exceptional for the world beyond our shores, for all who are interested in seeing what we are doing and in joining our project.”

p.194: “Reading Reagan, we see that this most conservative of modern presidents, even in underscoring this idea of American exceptionalism, pointedly expressed the idea that America existed for others, for those not yet here among us.  So if this is an idea that has been at the very core of our identity from before the beginning, can we truly continue to be America if we forget it?

p.211-212: “…Lincoln did not think America’s exceptionalism a mere accident of history.  Indeed…he makes clear that he sees our special role in history much as John Winthrop saw it and as many men in the two centuries connecting them saw it: as nothing less than a holy calling.”

p.214-215: “[The Puritans of Massachusetts Bay] would care for one another.  The rich would lift up the poor.  This is something that resonates with us today in large part because Winthrop and his fellow shipmates were successful.  What they did shone so brightly that their distinctly biblical model carried on beyond the Massachusetts Bay Colony and into the United States of America.”

So what is wrong with these passages from If You Can Keep It?

Before we examine the historical and theological problems here, let’s remember that the United States has, at times, been a force for good in the world.  It has provided a home to millions of immigrants fleeing persecution and economic hardship.  It has offered aid to oppressed and sick people groups around the world.  It has used its power to stop tyrants and advance freedom across the globe.  And in some circumstances American leaders–Woodrow Wilson comes to mind immediately–believed that they were extending American relief and support as leaders of a Christian nation.  (The previous sentence is a historical observation, not an ethical or theological one.  In other words, I am not saying that Wilson and others were right in believing this).

With that said, we must begin our critique with Metaxas’s use of Winthrop’s famous phrase.  Metaxas believes that Winthrop was correct when he called Massachusetts Bay a “city upon a hill.” I don’t know how he knows this, since there is nothing in the Bible about the United States of America, but he nevertheless thinks that Winthrop was on to something.  And then he argues that somehow the special mission assigned to Massachusetts Bay got transferred, presumably at some point during the American Revolution, to the United States.

As historian Tracy McKenzie has pointed out in his own critique of If You Can Keep It, Metaxas does not understand the way Winthrop was using the phrase “city upon a hill” when he uttered it in 1630.  I will let Tracy take it from here:

So what did Governor Winthrop mean when he told the Massachusetts Bay colonists that they would be “as a city on a hill”?  The most common reading—Eric Metaxas’ reading—is that Winthrop was telling the colonists that God had given them a special mission.  The colony they were establishing (and by extension, the future United States) was divinely destined to serve as an example to the world.  God’s plan was for the new nation to model the values (religious, political, and economic) that He desired the rest of the world to emulate.  Metaxas strengthens this interpretation by adding the adjective “shining” to the metaphor—“a shining city on a hill”—although we have Ronald Reagan to thank for that phrase, not John Winthrop.

Admirers of this reading have been deeply convicted by the sense of America’s high calling that it embodies.  In If You Can Keep It, Metaxas exhorts readers to rediscover this noble mission and rededicate themselves to it.  Critics, on the other hand, have scorned the arrogance that Winthrop was supposedly reflecting and promoting.  Both evaluations miss the mark, because both are based on a misreading of Winthrop’s original statement….

Far from claiming that the Lord had chosen the Puritan migrants to serve as a glorious example to the world, Winthrop was instead reminding them that it would be impossible to hide the outcome if they failed.  Their massive departure had unavoidably attracted the attention of the countrymen they left behind.  They would be watching, many of them hoping that the Puritans would stumble. If Winthrop had been writing today, he could have conveyed his point by telling his audience that everything they did would be under a microscope.  The point was not that they had been divinely selected to serve as an exemplary beacon, but rather that they could not possibly escape the scrutiny of their enemies.

So it is that in the very next sentence after noting that “the eyes of all people are upon us,” Winthrop warned that “if we deal falsely with our God in this work we have undertaken . . . we shall be made a story and a by-word through the world.”  In so many words, he was telling the migrating Puritans that they would become a laughingstock, objects of scorn and derision.  What was worse, their failure would “open the mouths of enemies to speak evils of the ways of God.”  Rather than puffing up the Puritans with claims of a divine mission, Winthrop intended his allusion to “a city upon a hill” to send a chill down their spines.

If McKenzie is correct, and I think he is, then one of the central arguments of Metaxas’s book completely falls apart.  McKenzie shows that there was little continuity between the way John Winthrop used the phrase “city on a hill” and Ronald Reagan (and Metaxas) used it in the 1980s. When Winthrop used the phrase it had nothing to do with Massachusetts Bay (or the United States of America) sharing its ideals with other nations.

But the problems with Metaxas’s argument go deeper.  I hope that his Christian readers will be bothered by the fact that Metaxas equates the United States of America with God’s chosen people.  By equating the United States with the chosen people of God he is propagating one of the worst forms of American exceptionalism.  Most versions of Christian theology teach that God no longer works through the nation of Israel but has instead established a “new covenant” with the church.  The church is a community made up of those who have embraced the redemptive message of the Gospel and, as a result, live their lives devoted to building the Kingdom of God, a kingdom defined by loving God and loving neighbor.  In If You Can Keep It, Metaxas conflates the calling of the church with the United States of America.  I am not sure whether to call this blasphemy or idolatry. Perhaps both.

For a more thoughtful Christian assessment of American exceptionalism I highly recommend John Wilsey’s American Exceptionalism and Civil Religion: Reassessing the History of an Idea.