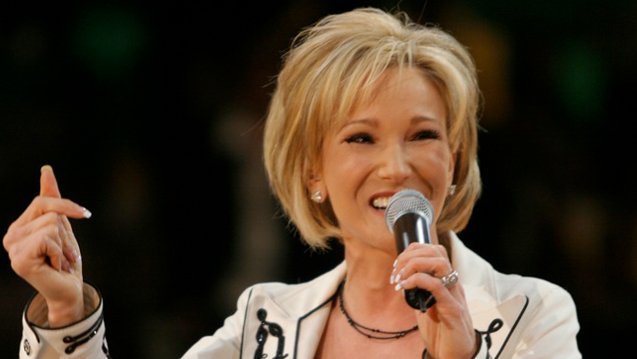 It is apparently prosperity preacher Paula White.
Here is Dobson’s statement:
Only the Lord knows the condition of a person’s heart.  I can only tell you what I’ve heard.  First, Trump appears to be tender to things of the Spirit.  I also hear that Paula White has known Trump for years and that she personally led him to Christ.  Do I know that for sure?  No.  Do I know the details of that alleged conversion?  I can’t say that I do.  But there are many Christian leaders who are serving on a faith advisory committee for Trump in the future.  I am among them.  There are about 45 of us that include Franklin Graham, Robert Jeffress, Jack Graham, Ben Carson, James Robison, Jerry Johnson, and many others whom you would probably know.  We’ve all agreed to serve. How will that play out if Trump becomes president?   I don’t know.  It is a good start, I would think.
If anything, this man is a baby Christian who doesn’t have a clue about how believers think, talk and act.  All I can tell you is that we have only two choices, Hillary or Donald.  Hillary scares me to death.  And, if Christians stay home because he isn’t a better candidate, Hillary will run the world for perhaps eight years.  The very thought of that haunts my nights and days.  One thing is sure:  we need to be in prayer for our nation at this time of crisis.
White helped to organize last week’s meeting with evangelicals in New York.
Here is White praying with Trump last year.

Notice what White prays here. (She is third person to pray–standing to Trump’s immediate right).  “That no weapon formed against him will be able to prosper and any tongue that rises against him will be condemned according to the word of God.”  In one fail swoop she casts the judgment of God on anyone who opposes Trump.

The laundering of Trump continues.