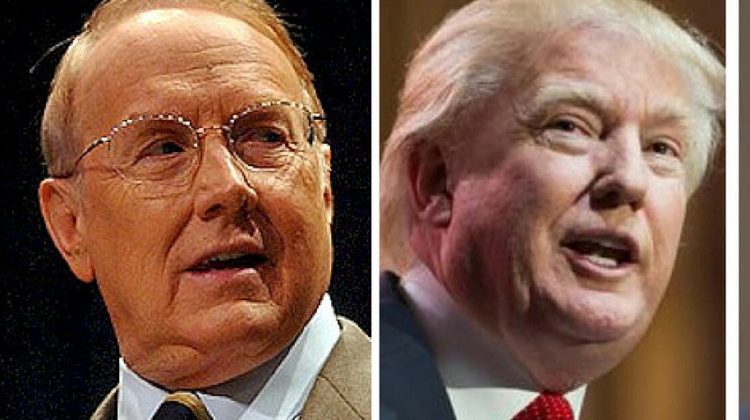 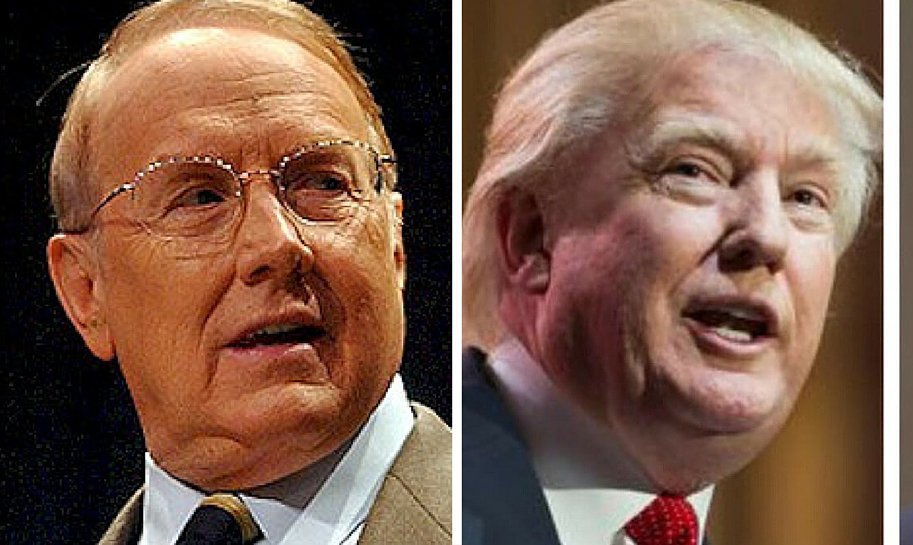 Apparently Donald Trump has had a conversion experience and is now a born-again Christian.
Following Trump’s meeting on Tuesday with evangelical leaders, York, Pennsylvania megachurch pastor Michael Anthony interviewed Christian psychologist, culture-warrior and radio-show host James Dobson about Trump.
Listen to the short interview here. (It is the one titled “Did Trump accept Christ?”).
Here is a transcript of the pertinent part of the interview:
Dobson: There are a lot of people ministering to him (Trump) personally…He did accept a relationship with Christ. I know the person who led him to Christ. And that’s fairly recent.
Anthony: No kidding. How recent?
Dobson: I don’t know when it was, but it has not been long.
Anthony: Wow.
Dobson: I believe he really made a commitment, but he’s a baby Christian.
This is the first I have heard about a Trump conversion.  Michael Anthony, who, of course, was also at the meeting on Tuesday, runs an organization called Godfactor.  He is the pastor of Grace Fellowship Church in York, Pennsylvania.  From what I understand, Grace Fellowship is a pretty mainstream evangelical church.
I am less interested in the validity of Trump’s conversion (I will let the pastors and theologians sort that out) than I am in Dobson’s statement.  (I will assume that the person on the recording was James Dobson.  I have listened to him on the radio enough to recognize his voice.  I also trust Anthony’s integrity).
Dobson and the others in attendance at this meeting seem to be making every effort to make Trump palatable for evangelical voters, even to the point of claiming that he had a born-again experience.  (An evangelical friend of mine, upon hearing this news, said that he hopes Trump’s conversion came after he said he has never asked for forgiveness).
Dobson’s approach comes from the old Christian Right playbook. It is an approach that assumes that the United States was once a “Christian nation” (although that phrase now seems to be replaced with the mantra of “religious liberty”) and the only way to save it from falling into the abyss is to cozy up to national politicians
Such an approach is problematic for two reasons.  First, it sacrifices the prophetic ministry of the church on the altar or politics and power.  This, it seems to me, is idolatry.  Instead of calling out Trump for a whole host of anti-Christian remarks and his “eye for an eye” approach to politics (I will not go into that laundry list right now–you can all rattle off the examples), these Christian leaders are making excuses for his behavior.  In the process, they fail to perform the kind of divinely-ordained work they are called to do.
What happened on Tuesday in New York was the theo-political equivalent of money laundering.  Dobson and his gang are making Trump clean so that he is worthy of evangelical votes.
Second, as James Davison Hunter has shown us, such an approach is not a very effective way of changing a culture.  (Perhaps I will develop these thoughts in a later post).
Dobson is not the only one who has fallen under Trump’s spell.  Head back over to Anthony’s website and listen to the American Family Radio interview.
On Wednesday, long-time Christian Right politico Ralph Reed defended, and even praised Trump on National Public Radio.  He supports Trump because the GOP nominee is pro-life, a good businessman, and seems to have been a good father.  Again, I don’t understand how a Christian like Reed with a public platform can ignore Trump’s temperament, personal style, views on immigrants and religious liberty, misogyny,  narcissism, vulgarity, anger, “eye for an eye” view of the world, etc.   It is sad to see Reed making excuses for Trump’s behavior.  How far has the moral bar been lowered by these so-called “evangelical leaders?”
Michael Anthony claimed that he felt God was speaking through Donald Trump during Tuesday’s meeting.
And then there was Wednesday’s “Image of the Day” at The Way of Improvement Leads Home.
I think my fellow evangelicals are being played.