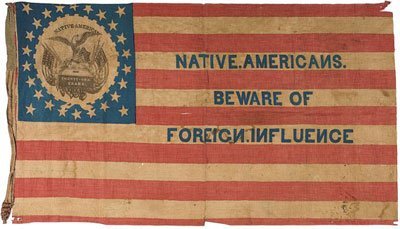 Several historians have compared the Trump candidacy to the American Party (commonly referred to as the Know-Nothing Party) of the 1850s.
Anyone who reads this blog or has read my Why Study History: Reflecting on the Importance of the Past knows that historical analogies can be dangerous, but when historian Gordon Belt posted the 1856 American Party platform on my Twitter feed today I was once again taken by some of the similarities between this nativist political platform from the 19th-century and the rhetoric of Trump’s campaign.
I will let you decide.
Here is the 1856 platform with some of my very limited, off-the-cuff, commentary:
(1) Repeal of all Naturalization Laws.
(2) None but Americans for office.
(3) A pure American Common School system.
(4) War to the hilt, on political Romanism.  (Replace “Romanism” with Muslims)
(5) Opposition to the formation of Military Companies, composed of Foreigners. (Read ISIS)
(6) The advocacy of a sound, healthy and safe Nationality. (In his speech today in New York Trump said “we are going to make America safe again”)
(7) Hostility to all Papal influences, when brought to bear against the Republic. (Replace “Papal influences” with Muslims)
(8) American Constitutions & American sentiments.
(9) More stringent & effective Emigration Laws. (Interesting that Trump did not mention the “Wall” in his speech.  Does he still want to build it?)
(10) The amplest protection to Protestant Interests.  (See Trump’s recent meeting with evangelicals in which he said he would protect their interests).
(11) The doctrines of the revered Washington.  (Today in his speech Trump said, “One of the first major bills signed by George Washington called for the ‘encouragement and protection of manufacturing’ in America”  I realize this is a bit of stretch, but he DID appeal to Washington for something!)
(12) The sending back of all foreign paupers.  (Round-up undocumented immigrants and send them back).
(13) Formation of societies to protect American interests.
(14) Eternal enmity to all those who attempt to carry out the principles of a foreign Church or State.  (Again, read Muslims).
(15) Our Country, our whole Country, and nothing but our Country.  (Today in his NYC speech Trump said “We are going to put America first and we are going to make America Great Again.”)
(16) Finally,-American Laws, and American legislation; and death to all foreign influences, whether in high places or low!  (Kill ISIS).
Again, I realize some of the comparisons I have made are not perfect (feel free to call me out), but they are still interesting and worth noting.  Consider this an exercise in “continuity” rather than “change over time.”