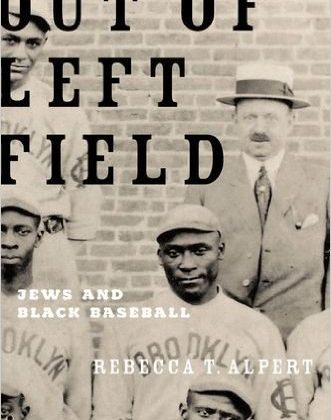 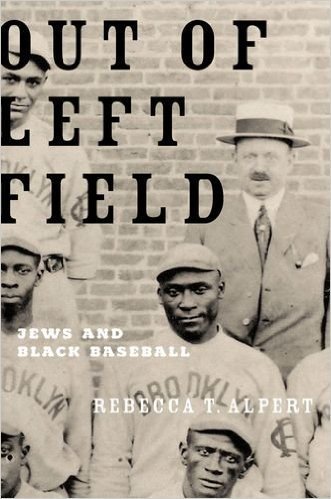 Rebecca T. Alpert is Senior Associate Dean of Academic Affairs at Temple University.  This interview is based on the forthcoming paperback release of her 2011 book Out of Left Field: Jews and Black Baseball (Oxford University Press).
JF: What led you to write Out of Left Field: Jews and Black Baseball?
RA: I grew up in Brooklyn, New York, an avid Brooklyn Dodgers fan. My mother taught me that the Dodgers were “Jewish” because they were responsible for breaking baseball’s color line, and racial equality is a fundamental Jewish value. As I began to do some research many years later, I discovered that my mother was not the only one who held that belief; many liberal Jews, like other ethnic groups in Brooklyn, believed that their support of Jackie Robinson integrating baseball was a big reason why that happened. (They weren’t entirely wrong; Branch Rickey could never have succeeded at his “Great Experiment” in St. Louis where he worked for many years; in fact, he never even tried.) I wrote an article about that topic entitled “Jackie Robinson: Jewish Icon.” But then I started to wonder, where were the Jews when baseball was segregated? Did they play any role in the Negro Leagues?
JF: In 2 sentences, what is the argument of Out of Left Field: Jews and Black Baseball?
RA: In Out of Left Field I argue that Jews made a unique contribution to mid twentieth century black baseball, in three ways. They played ball–a community of black Jews in Virginia, known as Temple Beth El, had their own team that played against the Negro League teams when they barnstormed through the South; they owned teams—several second generation Eastern European Jews were instrumental in the operation of the Negro Leagues; and they fought to integrate baseball—the Jewish sportswriters at the communist newspaper, The Daily Worker, both reported on Negro League games when other white newspapers ignored them, and led efforts to end segregation as early as the mid-1930s, working alongside the black press.
JF: Why do we need to read Out of Left Field: Jews and Black Baseball?
RA: The book opens up a new perspective on the old question of the relationship between Jews and African Americans. It shows quite pointedly that there is some kernel of truth to the myth of the Black-Jewish alliance in the post-World War II era, but that the story is much more complicated, as illustrated through these case studies of black Jews, Jewish businessmen, and Jewish communists that took place before and during the war.
JF: When and why did you decide to become an American historian?
RA: I actually don’t identify as an American historian; I’m a religious studies scholar who works primarily in the area of American Judaism. My interest in American Jewish history began when, as a religion major in college, I decided to spend my junior year in Israel to learn more about my Jewish identity. What I quickly discovered there was that I’m really an American Jew, and so when I went to graduate school I focused my studies on American Judaism. From there I quickly learned I couldn’t understand American Judaism without learning about American religion, and ultimately that I needed to understand American history to really comprehend American religion.
JF: What is your next project?
RA: I am continuing to work in the area of religion and sports, co-editing an anthology, Gods, Games, and Globalization: New Perspectives on Religion and Sports. It will include articles about religious groups of all shapes and sizes that have used sports as a vehicle for inclusion into the mainstream, as a recruitment device, or for developing spiritual and physical fitness. And beyond the “holy trinity” of American sports—baseball, basketball, and football—one finds the traces of transcendence in everything from mixed martial arts to soccer. All told, this collection will reveal the variety of religious experiences within sports on the global stage.
JF: Thanks, Rebecca!