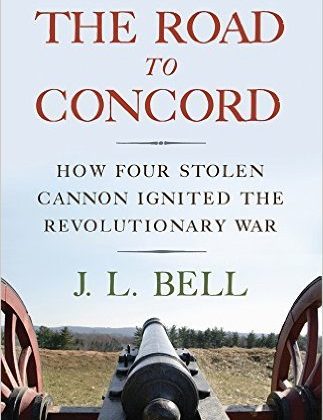 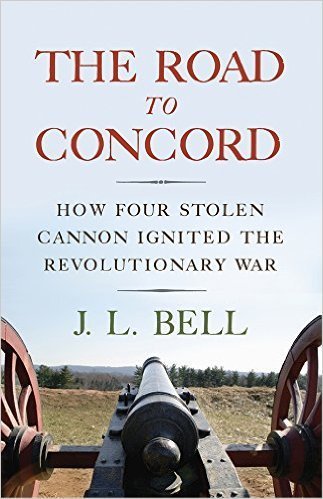 J.L. Bell is a historian and blogger at Boston 1775. This interview is based on his new book, The Road to Concord: How Four Stolen Cannon Ignited the Revolutionary War (Westholme Publishing, 2016).
JF: What led you to write The Road to Concord?
JLB: I grew up in Middlesex County, Massachusetts, during the Bicentennial. In fact, during the crucial 1975-76 year I was in fifth grade, when the state curriculum guidelines had students study the American Revolution. So between my surroundings, my school, and our national anniversary, I got a triple dose of the Revolution in New England. I knew that history had been told and retold for two centuries. I liked those stories, I really enjoyed David Hackett Fischer’s Paul Revere’s Ride, but I figured there was little more of significance to discover or rediscover.
Then I saw a couple of sources talking about Patriots stealing cannon from armories in redcoat-occupied Boston and smuggling them out into the countryside. I put those together and realized I’d run across the trail of a story that was no longer part of the regional or national narrative, that never been told in full before.
I approach history primarily as a storyteller, with the hope that the storytelling will highlight important forces and illustrate interesting patterns. And this was a story I couldn’t resist telling.
JF: In two sentences, what is the argument of The Road to Concord?
JLB: We think of the British troops marching to Concord in April 1775, arousing sleepy Middlesex villages and farms, in order to destroy some minor and miscellaneous military supplies (and perhaps to arrest Samuel Adams and John Hancock). In fact, those Massachusetts farmers had spent months amassing a significant artillery force, finding particular cannon was at the top of the British commander’s wish list for the expedition, and both sides had reasons to keep those facts out of their official reports.
JF: Why do we need to read The Road to Concord?
JLB: The start of the Revolutionary War is, of course, a major part of the U.S. of A.’s origin story. The Road to Concord peels back a layer of that myth to expose new details. Those details undercut the traditional picture of New Englanders defending their homes only with muskets and fowlers, and of Gen. Thomas Gage trying to suppress general unrest. The book argues that the New England governments prepared for war more than they let on and that G en. Gage had a personal motive for ordering troops to Concord. It also suggests that the way those circumstances were suppressed, resurrected, and discarded in U.S. historiography illuminates how we’ve collectively remembered our Revolution.
JF: When and why did you decide to become an American historian?
JLB: I first started to research the American past with an eye toward writing historical fiction for kids. In 1998, around the time I was leaving a long-time job as a book editor, I stumbled over the story of Christopher Seider, a boy about eleven years old shot dead in a political riot shortly before the Boston Massacre. It’s rare to find an example of children as significant, decision-making actors in historical events—not just bystanders. So I began to research the Revolution in New England more deeply. That work led to a chapter in James Marten’s anthology Children in Colonial America (NYU Press) and other publications.
In that same shooting, another boy was wounded—a nineteen-year-old decorative painter named Samuel Gore. And he turned into quite the activist. After Gore died in 1831, he was one of the first Bostonians to be publicly identified as a participant in the Tea Party. And Gore had told this story about stealing cannon from an armory under redcoat guard…
As to why I find history so interesting, I can’t really say. I’ve always been drawn to stories from the past. But in college, my interest in writing and literature led me to a more general major. One of my greatest regrets now is having been at a university with a stellar American history faculty and not taking any classes in the subject. Not being so specialized turned out to be valuable for my work as an editor, but I had no idea what would happen past that first job.
JF: What is your next project?
JLB: Chronologically, my next history project to appear will be the second volume of Colonial Comics: New England (Fulcrum). Jason Rodriguez is the chief editor of that series, and A. Dave Lewis and I are assistant editors. We’re working with a terrific team of writers and artists interpreting episodes from the lives of a range of eighteenth-century Americans. I also wrote the scripts for a couple of comics in that book: one about printers fighting for freedom of the press, drawn by the Eisner Award–winner Braden Lamb, and one about the aftermath of the Boston Massacre, brought to life by Jesse Lonergan.
JF: Thanks, J.L.  Great stuff!