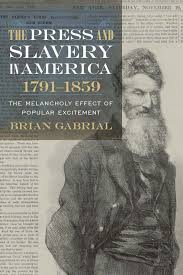 Brian Gabrial is Associate Professor and Chair of Journalism at Concordia University. This interview is based on his new book, The Press and Slavery in America 1791-1859: The Melancholy Effect of Popular Excitement (University of South Carolina Press, 2016).
JF: What led you to write The Press and Slavery in America 1791-1859?
BG: I am a journalism historian who has long been interested in how we come to think about people or groups and how the press influences those perceptions. In particular, I was concerned with how the “mainstream” press marginalizes or silences people. My earlier research focused on the American Indian and their mistreatment in the 19th-century press. Following that, I turned my attention to the African American slave.
JF: In 2 sentences, what is the argument of The Press and Slavery in America 1791-1859?
BG: The book demonstrates that slavery was the critical political issue in the three decades before the Civil War and that political intransigence over it caused the war. It importantly illustrates how white Americans’ ideas about race and racial problems had their roots in the past and have sad, contemporary resonance.
JF: Why do we need to read The Press and Slavery in America 1791-1859?
BG: The book shows how the press was complicit partner with powerful political structures that maintained a horrific labor system. It reveals how many Americans were informed about slaves who were never a happy, docile group content with their lot. Instead these black Americans faced enormous obstacles that kept them in figurative and literal chains and yet fought for freedom when facing certain death as a result.
JF: When and why did you decide to become an American historian?
BG: I have always a strong interest in history, but I didn’t want to become a historian until graduate school and had an incredible mentor and advisor who gave me the intellectual freedom explore ideas about cultural history and the press’s place and role in that history.
JF: What is your next project?
BG: I am currently working on another long-term media discourse study that I call “Manifest Destiny north.” It concerns the 19th-century relationship between the United States and Canada (British North America) before Canada’s 1867 confederation. The focus is how the American press reflected an idea that Canada rightfully belonged to the United States. To counter this, the Canadian press reflected its own ideas about Canadian nationality and identity. Like the Press and Slavery book, it may show how these ideas retain contemporary resonance.
JF: Thanks, Brian!