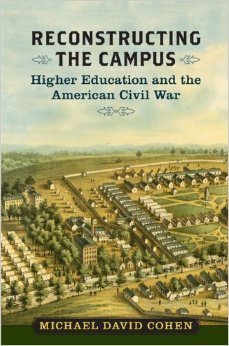 Michael David Cohen, editor of the Correspondence of James K. Polk and Research Associate Professor of History at the University of Tennessee-Knoxville, checks in with another post from the floor of the annual meeting of the Organization of American Historians.  For his previous posts click here.  Cohen is the author of Reconstructing the Campus: Higher Education and the American Civil War (University of Virginia Press, 2012).  Enjoy–JF
My third day at OAH 2016 included a real treat. Not often does a session unite three of my historical passions: documentary editing, the U.S. presidency, and the history of education. “Presidents and Patronage,” however, did just that. Exploring patronage in a broader sense than job appointments (a dismal task that I know ate up much of James Polk’s time and patience), editors from the papers of George Washington, John Adams, and Thomas Jefferson told us some of their exciting discoveries about these men’s lesser-known activities.
I was glad to hear all the panelists, plus the commentator and audience, discuss not only the first three presidents but also the nuts and bolts of a documentary editor’s job. Few people, after all, really know what it is we do. We do not, as some may guess, abridge nonfiction films. Rather, we prepare published editions (in print or online) of primary sources, usually the papers or letters of a major historical figure. As a result, if you wish to draw on the writings of Washington, Adams, or Jefferson, you need not travel to numerous archives, decipher terrible handwriting on water-damaged sheets, and research every “Mr. Brown” mentioned. The panelists have located, transcribed, and annotated the documents so that you just reach to a bookshelf or navigate to a website.
Neal Millikan, discussing the field, focused on the task of identifying major stories for each volume of the Washington Papers. Though the documents address numerous topics, finding the main plot line helps to guide document selection, annotation, and of course writing jacket copy at the end. Dr. Millikan, currently working on the last—the last!—volume in the presidential series, found that plot line for the first president’s final six months in office to involve his concern with the building of Washington, D.C. Worried that it might not be complete by 1800, as required by law, he anxiously corresponded with the commissioners overseeing it. Millikan mentioned what Washington described as a “jocular letter from the Capitol”: a missive from a relative, written from the perspective of Congress’s future building, that lamented no one’s seeming to care about it. The president probably got both a laugh and a pang out of that.
Sara Georgini explained that an indexing dilemma led to further insight into John Adams’s accomplishments while a commissioner to the United Kingdom in the 1780s. (Her remarks touched a chord among the editors in the room, on and off the panel, who shared their own frustration with the crucial but challenging job of indexing an edition.) The Adams Papers try to index his doings as public and private activities, but he did much on the border between those two. This helped Ms. Georgini to discover, and to show through the documents, the importance of Adams’s working on the fringe of formal diplomacy to bend European intellectuals toward support of U.S. culture. She dubbed the job “cultural diplomacy.”
Ellen Hickman, after agreeing on the challenge of indexing Adams, moved the discussion to Jefferson’s efforts in 1818–19—the period of volume 13 of the Jefferson Retirement Series, due out next January—to get Virginia to establish its state university at Charlottesville. She shared the sentiment (with which I’m well familiar) that whichever documentary volume one has just been immersed in seems the most important in the series. But this one, she promised us, really is the most important (until volume 14). Jefferson stepped out of his “self-focused” retirement to engage once more in public life, though trying his best to stay invisible to the public eye. When the legislature created a committee to plan the university, he completed its report before the committee met; later he, anonymously, authored the bill that located UVA at Charlottesville.
As commentator, Gordon Wood heaped well-deserved praise on all three speakers. Reminding us of the sad fact that most historical monographs are forgotten within a few years of publication (thank you, UVa Press, for displaying mine here nearly four years later!), he pointed out that the editions that Millikan, Georgini, and Hickman produce will nourish scholarship and bring primary sources to students and others for many decades to come. Their massive knowledge, gained through close study of their presidents’ writings and broad study of their context, make them sound like they know these men personally. Dr. Wood might even have added that the editors know them better than almost any of the presidents’ contemporaries. Few if any friends learned their thoughts about every topic on which they ever wrote.
My summary does not do justice to the three papers or to Wood’s commentary. I’ve highlighted their insights about the job of editing historical documents, but of course they went into much more depth about their historical findings. Hopefully, as Wood urged, all three panelists will publish their papers as articles. Whether they do or not, they’ve shown us just a few of the fascinating nuggets we can mine in their editions. So explore those editions, online or on paper, and use them in your research or classroom!
Start with the indexes.