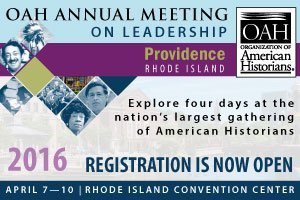 Thanks for reading The Way of Improvement Leads Home this weekend.  Today has been a very busy day so I did not do too much blogging. I did, however, wanted to write at least one post on the day’s events.  Here goes:
This morning I attended a session on Kevin Kruse’s book One Nation Under God: How Corporate America Invented Christian America. I know I promised on Twitter that I would write a more extensive post on this session, but I am just not going to get to it tonight.  I thus want to direct readers to #oah16_208  You can find all of my tweets there.  I still want to try to write a post on this session.
This morning I also chaired a session on teaching religion.  It was great to meet Mark Silk and Diane Moore.  It was a small crowd (about 15 people) but we had a good discussion. After the session I had the privilege of talking religion and politics with Silk, a veteran journalist and scholar whose work as an observer of American religion I have admired for a long time.
I spent most of the afternoon enjoying some intellectually stimulating meetings with new friends and old friends.  I love that the OAH provides tables near the book exhibit where attendees can sit, eat, drink coffee, and chat.  I took full advantage of it.
My day ended with Jon Butler’s presidential address on religion in New York City.  Butler argued, contra Max Weber and William James, that as modernity invaded New York, religion became stronger.  Read the tweets at #oah_butler
Again, I hope I get some time to expand on all of these sessions.  Stay tuned.
I will be attending at least one (maybe two) more session on Sunday morning before driving home.  Follow @johnfea1