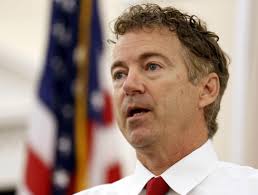 Rand Paul is out of the presidential race, but he is still a United States Senator from Kentucky.  He is also historian David Swartz‘s Senator.  Swartz, the author of the excellent Moral Minority: The Evangelical Left in an Age of Conservatism, teaches at Asbury College in Wilmore, Kentucky.
In an ongoing series at his blog titled “Unexpected Sites of Christian Pacifism,” Swartz turns his attention to Paul.  I love how Swartz frames this post. He knows that virtually everyone is going to be mad at him for pointing to Rand’s pacifist streak, but he definitely seems to be on to something.
Here is a taste:
This post on politician Rand Paul, the latest in a series that has included Pentecostals, holiness groups, and Charles Spurgeon, will probably perturb everyone. Conservatives will object because they won’t want to be linked to the “liberal” position of pacifism. Libertarians will object because theirs is not a principled pacifism, but a fiscal one. Pacifists will object because theirs is a not a fiscal one, but a principled one. Progressives will object because they, though perhaps admiring Paul’s rhetoric of peace, don’t want to be linked to the right wing. But Rand Paul is a person, not a platonic ideal, and he, even more than most people, defies easy categorization.
Back in May 2013, Paul, a Kentucky senator and likely presidential candidate in 2016, gave an extended interview to the Christian Broadcasting Network. (You can watch the entire 28-minute feature here.) It didn’t get much press at the time, but Paul, as he is prone to do, pushed back against established narratives. Concerned about the Republican enthusiasm for international conflict, he contended that Jesus “wasn’t really involved in the wars of his days.” He continued, “Part of Republicans’ problems and, frankly, to tell you the truth, some in the evangelical Christian movement I think have appeared too eager for war. . . . I think you need to remember that [Jesus] was the ‘Prince of Peace.’”
Paul has persisted in this anti-violence refrain. In June at the Freedom and Faith Conference, he articulated a strong pro-life message on abortion (pro-life groups say he has a 100% pro-life voting record on 8 votes in the Senate). He also declared, “Jesus reminds us what our goal should be when he proclaims, ‘Blessed are the peacemakers for they shall be called children of God,’ . . . It’s unacceptable to have, and appoint, leaders who really show no reluctance for war.”
Read the entire post here.