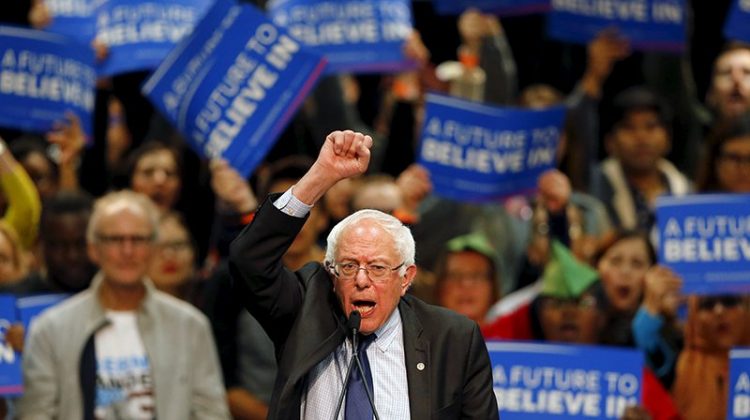 Religion News Service is running my essay on Bernie Sanders’s religion under the title “In Bernie Sanders’ deeply religious message, an echo of the Founding Fathers.”
Here is a taste:
(RNS) Bernie Sanders’ political revolution rolled on Tuesday night with crushing victories over Hillary Clinton in Utah and Idaho. While it will be difficult for the Vermont senator to catch Clinton in the delegate race for the Democratic Party’s presidential nomination (Sanders lost to Clinton in Arizona on Tuesday), he continues to preach a political message that is resonating with large numbers of voters.
It is a message that is deeply religious.
Over the last several months, reporters have asked Sanders to explain his religious beliefs. Here is how he responded to such a question from CNN’s Chris Cuomo during a recent town hall meeting:

“Every great religion in the world — Christianity, Judaism, Islam, Buddhism — essentially comes down to ‘do unto others as you would like them to do unto you.’ And what I have believed in my whole life (is) that we are in this together. … The truth is, at some level when you hurt, when your children hurt, I hurt.  And when my kids hurt, you hurt.”

Sanders’ approach to faith and our life together in this world is different from what we are hearing from nearly all the people who are still running for president.
The Republican candidates talk about faith in terms of self-interest. They quote the Declaration of Independence to remind their followers that rights come from the Creator and thus must be protected.
Until very recently, Hillary Clinton rarely framed her political message, or her talking points about growing up Methodist, in terms of the common good.
Sanders’ comments about faith echo three distinctly American voices.
Read the rest here.
NOTE:  This piece also appears today at the Salt Lake City Tribune and the Colorado Springs Gazette.