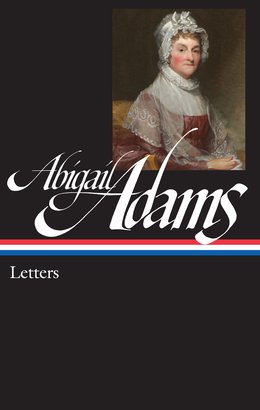 The Library of America has announced the publication of Abigail Adams: Letters.  The collection of 430 letters from the former first lady is edited by historian and Adams scholar Edith Gelles.
In a post at The Library of America blog, Gelles discusses Abigail’s remarks on the election of 1800:
“The Spirit of party has overpowerd the Spirit of Patriotism,” observes Abigail Adams in her January 29, 1801, letter to her eldest son John Quincy, then American minister to the Prussian court in Berlin. Written after having learned that her husband John had been defeated for a second term as president, Adams’s letter vividly conveys the unsettled nature of American politics in the early republic.
The election of 1800 was perhaps the most vituperative in our history. Federalist John Adams, the incumbent, was despised by a prominent faction of his own party, the so-called Essex Junto. Alexander Hamilton, the de facto leader of the Federalist party, had written a pamphlet denouncing the President as a madman. This fratricidal conflict opened the door for the two Republican candidates, Thomas Jefferson and Aaron Burr, who, by a fluke of the original electoral process established by the Constitution, ended up tied in the Electoral College, with Adams coming third. The deadlock shifted the decision to the House of Representatives, where it would take 36 ballots for Jefferson to secure election. Denied a second term, President Adams, in a move that was as controversial then as it would be today, made a series of “midnight appointments” in the final days of his administration, including that of John Marshall to be the Chief Justice of the Supreme Court. As the young nation prepared for the first transfer of power from one party to another, the outgoing First Lady despaired for the future.
Adams’s mood in this letter is melancholy for more personal reasons as well. She had recently arrived in the swampy new capital, the first First Lady to occupy what would become known as the White House. On her journey to Washington, over roads that were so rutted that “it was like a ploughd field,” she had passed through New York City to pay a “dying visit” to her beloved second son, Charles, who was fast fading from the effects of alcoholism. Not yet regarded as a disease, alcoholism was then considered a sign of personal weakness and a sin. She prays that Charles, the son she remembers as the charming and loveable man “he once was,” will be forgiven, and that John Quincy will become a surrogate father to his younger daughter. Abigail and John took Charles’s older daughter, Susanna, home with them to Quincy, Massachusetts, where she remained until her marriage in 1817.
Read the rest here.