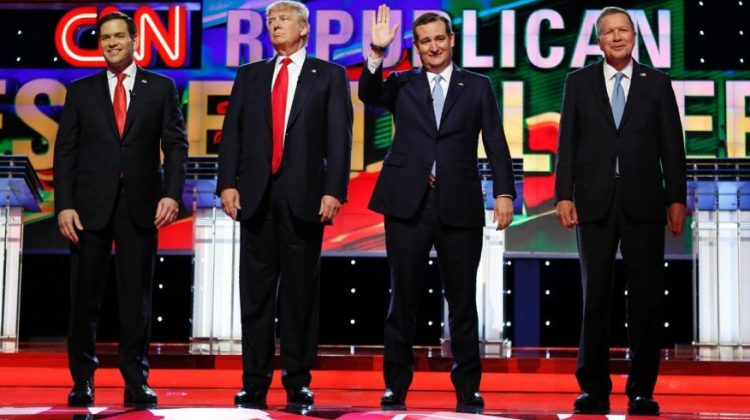 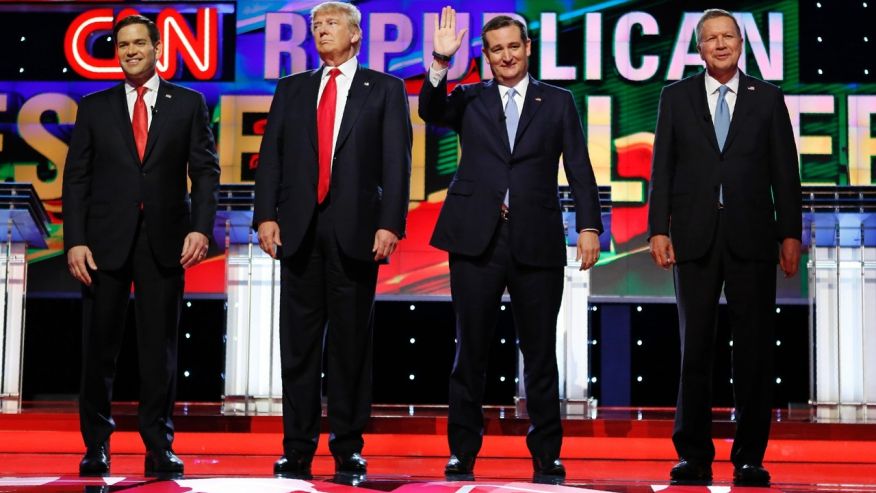 This the most succinct and clear explanation of the various scenarios that could play out in the GOP between now and the July convention in Cleveland.  Thanks to Benjamin Ginsburg at Politico for writing it and Brian Franklin of SMU for bringing the piece to my attention:
A taste:
Trump can put all the contested convention talk to rest by securing a majority of delegates before July, and winning Ohio and Florida would go a long way to achieving that. If he doesn’t win both, the talk will continue.
While Trump is the frontrunner, he has won only about 44 percent of the delegates awarded in states that have voted so far. By comparison, Mitt Romney had won 56 percent of the delegates at this point in the 2012 primary; he became the presumptive GOP nominee in mid-April and secured a majority of delegates in late May. If Trump maintains his current rate of 44 percent, he will go into Cleveland with just 1,088 of the 2,472 total delegates—149 short of the 1,237 needed for a majority.
Trump suggested in Thursday night’s debate that the leading candidate, even one shy of a majority, should automatically receive the nomination. But to allow a candidate to be declared the nominee with only a plurality of delegates would require the unprecedented amendment of the existing rules, a feat of rules wizardry as transformative as denying a candidate with a majority the nomination.
Rather than a wholesale rewriting of the rules, the more likely scenario is that if Trump goes into the convention without a majority, he will need to convince enough of the few unbound delegates there to support him. (The unbound delegates consists of those from five states that decided not to hold statewide votes, as well as 54 from Pennsylvania who were directly elected without declaring a presidential preference.) That approach is consistent with the existing rules—but it won’t be easy. In fact, it could lead to convention mayhem.
President Gerald Ford, who went into the 1976 convention without a majority, had to do this to defeat Ronald Reagan. But Trump would be in a tougher spot: In the first presidential roll call vote at the convention, a rule in effect for the first time in 2016 automatically binds more than 90 percent of delegates to specific candidates based on those delegates’ statewide votes. That leaves only a very small pool of delegates that Trump could win over in order to reach a majority on the first ballot: 166 delegates who are already unbound, plus an unknown number whose state laws will unbind them if their candidate drops out by the time of the convention. (There are currently 12 of these delegates, but, importantly, that number will increase if one of the current candidates drops out. For example, should Marco Rubio drop out without winning any additional delegates, 152 delegates would be added to the unbound pool, nearly doubling the number available to Trump’s powers of persuasion to gain a first-ballot majority.)
As things stand now, however, Trump would need to win over a dauntingly high portion of the 166 unbound delegates—nearly 90 percent—in order to get the 149 delegates he would need to reach an overall majority. And many of these unbound delegates are likely to be supporters of candidates Trump has defeated, and could have a less-than-kind view of him.
Read the entire piece here.