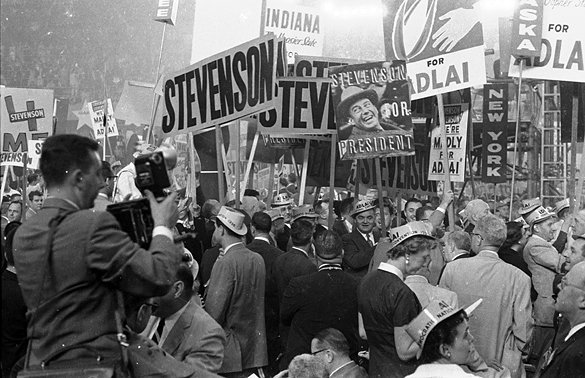 If John Kasich wins the GOP primary in Ohio tonight we just might be on our way to a contested convention this summer in Cleveland.  (If Marco Rubio pulls the upset in Florida the chances of a contested convention are even better).
Over at the website of the Pew Research Forum, Drew Desilver defines a “contested” convention and reminds us that this has happened multiple times in American political history.
Here is a taste:

A contested convention, for those who’ve never experienced one (which is to say, everyone under the age of 35 or 40), occurs when no candidate has amassed the majority of delegate votes needed to win his or her party’s nomination in advance of the convention. A candidate still might gather the delegates needed by the time balloting begins, in which case the nomination is settled on the first ballot. But should the first ballot not produce a nominee, most delegates become free to vote for whomever they wish, leading potentially to multiple ballots, horse-trading, smoke-filled rooms, favorite sons, dark horses and other colorful elements that have enlivened American political journalism, literature and theater.

Even before primaries and caucuses came to dominate presidential campaigns in the 1970s, parties generally didn’t welcome contested conventions, especially when they went past the first ballot. And for good reason: Candidates who needed multiple ballots to be nominated seldom went on to win the White House.

We looked at all 60 Democratic and Republican nominating conventions from 1868 (the first post-Civil War election) to 1984, the last time a convention presented even a glimmer of uncertainty. Over that time, 18 candidates (eight Republicans and 10 Democrats) were nominated on multiple ballots; of those, only seven were elected president (and four of them were running against another multiple-ballot nominee, so one of them had to win).

All told, of the 22 presidential elections held between 1868 and 1952 – the last multiple-ballot nomination to date, of Adlai Stevenson as the Democratic standard-bearer – 14 featured at least one major-party nominee who’d won on multiple ballots. (These often were referred to as “brokered conventions,” a term we’re avoiding here because of its connotations of shady backroom deals.)