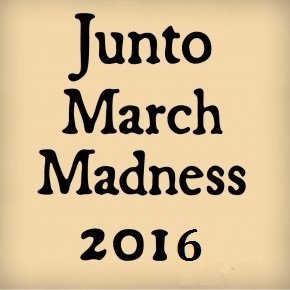 In case you haven’t seen the First Round results in the 2016 Junto March Madness tournament, my article “The Way of Improvement Leads Home: Philip Vickers Fithian’s Rural Enlightenment (JAH 2003) lost to Jon Butler’s “Enthusiasm Described and Decried: The Great Awakening as Intepretive Fiction,” (JAH 1982).  Butler received 58% of the vote.  I received 42%.
Here is a taste of the Junto results summary:
It was an interesting first round, everybody. 168 of you voted, which, as you’ll see, was a real problem in one of our brackets. Upsets occurred in every category, and we had our first ever March Madness tie. Read on for your results!In the Atlantic World, Warsh surged at the end to defeat Gould. Things got complicated, as they tend to, in the Gender bracket, where Camp and Hughes Dayton tied (more on how we’re dealing with this, below). In Economic and Social History Rao smoked Hartog, and in the American Revolution Brown beat out Jasanoff. The History of Ideas had two upsets; Junto supporter Fea lost to Butler, despite a strong Twitter game, and Kloppenberg lost to Grasso. In Native American history Barr upset Greer, and in Slavery and Race Formation Waldstreicher just beat out Johnson. Our Historiography and Theory bracket was the only bracket in which the seeds performed as anticipated. It’s shaping up to be an exciting tournament!
I am still not sure how my article received a #1 seed in the “History of Ideas” category.  It is perhaps even stranger that Butler’s article received a #8 seed.  So I guess, technically, the Butler victory was an “upset.”  Although any early American scholar worth his or her salt knows that Butler was the favorite.
Oh well.  We made a nice run.  Thanks to everyone who voted for Philip Vickers Fithian and the “rural Enlightenment.”  I hope that everyone who voted for my article will now throw their support behind Butler in the “History of Ideas” bracket.  His 1982 article really did shape the field.