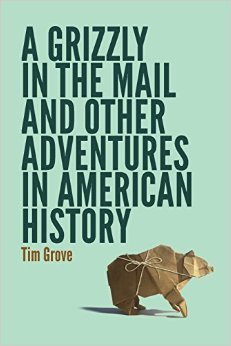 Tim Grove is Chief of Museum Learning at the Smithsonian National Air and Space Museum. This interview is based on his book, A Grizzly in the Mail and Other Adventures in American History (University of Nebraska Press, 2014).
JF: What led you to write A Grizzly in the Mail and Other Adventures in American History?
TG: I started writing about some transformative experiences I had while working on the National Lewis and Clark Bicentennial Exhibition. Some friends encouraged me to write about my adventures with Lewis and Clark, and I knew they would become less vivid with the passage of time. I kept writing, adding new chapters, woven together by my career arc.  Ultimately I ended up with a collection of projects that offer a glimpse into the life of a public historian who has worked at some of America’s great history museums. Always intended for a general audience, and especially for armchair historians, the book hopefully teaches readers about historical thinking and presents a different perspective on a history career.
JF: In 2 sentences, what is the argument of A Grizzly in the Mail and Other Adventures in American History?
TG: Through this eclectic look at various topics in American history, I hope a broad audience will gain a new understanding of the challenges of researching and presenting the past. Through hands-on examples I wanted to show that history is complex, fascinating, fun, relevant and so much more than names and dates.
JF: Why do we need to read A Grizzly in the Mail and Other Adventures in American History?
TG: There aren’t many books available that provide a behind-the-scenes look at the challenges of making history accessible to millions of people. Part memoir, insider perspective and scholarship, my book shows in a very tangible way what it’s like to use history on the job. So many people visit the places where I’ve worked, from the National Museum of American History and the National Air and Space Museum, to Colonial Williamsburg, and this book offers them a peek behind the curtain. (No vast Smithsonian storage areas exist under the National Mall for example!) The book emphasizes the historical process.  Some of my stories are fun, such as learning to ride a highwheel bicycle, planting cotton on the National Mall, and searching for buffalo; others, such as the Williamsburg slave auction and cultural encounters on the Lewis and Clark trail, are hopefully thought-provoking. I pose some tough questions like who owns history, who has the right to tell whose story, and what does it mean to “experience” history? With Lewis and Clark I offer different examples of about how we remember, ask who was the real Sacagawea and discuss oral tradition versus written evidence. I even talk about using cemeteries as primary sources by comparing the grave markers of Lewis and Clark. The book attempts to bust a few myths along the way, too, like the fact that Eli Whitney did not invent the cotton gin.
JF: When and why did you decide to become an American historian?
TG: I’ve loved history since my parents took me to historic sites up and down the East Coast as a child. The power of place made history come alive in my imagination. I ended up studying journalism in college because I didn’t want to teach history in a classroom. I was not aware of public history until I started researching grad schools. My fascination with history was so strong that I decided I wanted to find a way to make a living pursuing the past. A grad internship at Colonial Williamsburg confirmed my decision and an informational interview at the Smithsonian National Portrait Gallery (one of my favorite museums) pointed me in the direction of museum education and landed me my first position at the Smithsonian. Over the years I’ve educated literally millions of people through exhibitions and programming and publications.
JF: What is your next project?
TG: After Grizzly was published, my writing took an unexpected turn when I worked on an exhibition featuring the first airplane to circumnavigate the globe. It’s a grand adventure story from 1924 that is not well-known. I determined to share this story with younger generations and ended up writing a book for ages 10-14, First Flight Around the World. To my surprise the book has garnered much attention and I’m following it with another book for that age group, Milestones of Flight, based on a new exhibition I’m working on that will open July 1 at the National Air and Space Museum (for the museum’s 40th anniversary). While I hope to begin researching another popular history for adults again soon, my experience with books for young readers taught me there is a huge need for nonfiction books for this audience and that books based heavily on primary source materials are much appreciated by teachers and librarians. So, my next book might be another children’s book. But at this very moment I’m working on six (!) exhibitions and a second edition of The Museum Educator’s Manual.
JF: Thanks, Tim!