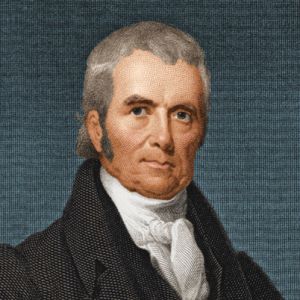 Over at the blog of Oxford University Press, historian R.B. Bernstein reminds us that John Marshall, the man who many consider to be the most influential Supreme Court Justice in American history, was a so-called “lame-duck” appointment.
Here is a taste:
Those who argue that lame-duck presidents should not nominate justices to the Supreme Court have forgotten or ignored the most consequential appointment in the Court’s — and the nation’s — history: President John Adams’s 1801 appointment of John Marshall as the nation’s fourth Chief Justice.
The vacancy in the Chief Justiceship did not arise until after the 1800 presidential election, in which Adams lost his bid for a second term, and the disputed tie between Thomas Jefferson and Aaron Burr persisted into 1801. Chief Justice Oliver Ellsworth, whom Adams had sent to France to negotiate a treaty to bring an end to the 1798-1800 “quasi-war” between France and the United States, sent the treaty that he had negotiated to President Adams – accompanied by his letter of resignation from the Court….
The Ellsworth resignation complicated President Adams’s life far beyond what he could have foreseen. Adams faced a multi-level crisis in American politics — how to respond to the seeming failure of all efforts to break the deadlock in the House of Representatives between Jefferson and Burr for the presidency; how to deal with the Federalist-dominated Congress’s efforts to reform the federal judiciary, both to make it more efficient and effective and to create many new judicial posts for Federalists; and whom to choose to replace Ellsworth.
Many Federalists called on Adams to name a die-hard High Federalist, in particular advocating the nomination of Justice William Paterson, a man whom Adams distrusted as an ally of such High Federalists as Alexander Hamilton and not a friend or supporter of the President. Adams also faced suggestions that he promote another Associate Justice, William Cushing, to the chief justiceship – even though Cushing had turned down such a promotion back in 1795, after the resignation of the first Chief Justice, John Jay, to become governor of New York. Some Senators even proposed that Adams name himself the new Chief Justice, an idea that the president rejected with scorn. Adams instead chose to name Jay to his old job, and the Senate confirmed the appointment. Though Jay seemed an ideal choice, liked by both factions of Federalists and a holder of the position from 1789 to 1795, nobody had asked Jay whether he wanted to return to the Court. On receipt of the news of his nomination by the president and confirmation by the Senate, Jay wrote to Adams thanking him for the honor but frostily rejected his reappointment, on the grounds that the federal judiciary was neglected, undervalued, and frustrating for those serving on it, and declaring his absolute refusal of reappointment.
In turn vexed by the choices before him, Adams turned to Marshall, his Secretary of State. Marshall was a loyal supporter of President Adams, a Virginia Federalist, an excellent attorney, and a widely-praised diplomat; in addition, Marshall had served Adams well as Secretary of State for a year when Adams decided to nominate him for the Chief Justiceship. Adams nominated Marshall with only weeks remaining in his presidency. Though the Federalist Senate at first was reluctant to agree, preferring a High Federalist like Justice Paterson, they knew that Adams would not nominate him (something that Adams had already told Marshall with considerable heat). The Senators realized that rejecting Marshall would create a deadlock that would leave the vacancy on the Court to be filled by Thomas Jefferson or Aaron Burr. Such a prospect was too dangerous for them to accept, and they confirmed Marshall.
John Marshall served 34 years as Chief Justice and left an extraordinary mark on the nation’s history and on American constitutional development. His judicial opinions on such matters as judicial review, federalism, national supremacy, and interstate commerce form the spine of American constitutional law. Nearly two centuries later, we live in the constitutional world that John Adams and John Marshall helped to create, a world that is now the nation’s heritage. And the Marshall precedent cuts against claims by leading figures in today’s Republican Party that no lame-duck President should make an appointment to the nation’s highest court.
Read the entire post here.