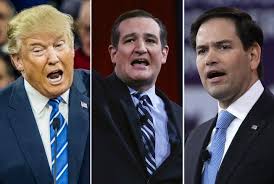 Over at Religion News Service, Tobin Grant has a nice post about the way South Carolina evangelicals voted in Saturday night’s primary.
It is worth noting that Cruz did not win a single county.  The Texas Senator lost to Trump in the heavily evangelical counties in the Upstate.
Here is a taste:
The geography of the South Carolina primary fits the story coming out of the exit polls. Rubio did well among Republicans who want a candidate who can win. Trump voters want someone who can shake up Washington and “tell it like it is.” Cruz needs to secure most (if not all) of the evangelical and values-voters. He’s leading among these voters, but many of them are backing Rubio and Trump instead.
So here is my take:
I think evangelicals in South Carolina are all “values voters” in the sense that they want a candidate who is pro-life on abortion, “protects” (to use Trump’s term) Christianity, and believes that marriage is between a man and a woman.  It seems like these things are non-negotiable.  Since all of the GOP candidates still alive in the race fit the bill here (or at least claim to fit the bill), they need to be distinguished in other ways.
Many self-proclaimed evangelicals are supporting Trump for economic and cultural reasons.  Economically, they believe, like Jerry Falwell Jr., that Trump’s business background will help him “make America great again.”  But they also like the fact that Trump wants to deport immigrants, sees Islam as a threat, and stands against political correctness.  The position of South Carolina evangelicals on all of these issues is often informed by their understanding of Christianity.
Cruz seems to be attracting more traditional, 1980s Moral Majority style, evangelical values voters. They are concerned about the economy, religion, immigration, and Islam, but these things take second place to issues such as abortion and traditional marriage. They are much more sensitive to the makeup of the future Supreme Court than the people voting for Trump.
Rubio continues to attract evangelicals who are politically conservative and evangelically moderate (in terms of how they apply their faith to politics).  As Grant notes in his article, these are the evangelicals who think Rubio has the best chance to win in November.
I think Jeb Bush’s votes will be split between Rubio and Kasich.  If Carson get’s out of the race, the doctor’s votes will be split between Rubio, Kasich, and Cruz.