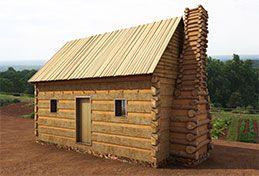 C-Ville, a website covering life in the Charlottesville, VA area, is running a nice piece on slavery interpretation at the homes of Virginia presidents Thomas Jefferson, James Madison, and James Monroe.
Here is a taste:

The sickeningly horrible institution of slavery was a blight on our nation until the Civil War ended it in 1865 at the cost of 750,000 American lives. Despite the passage of 150 years, however, and despite the country’s best attempts at education, the interpretation of slavery at historic sites—the presentation of the lives of those enslaved—is still controversial, emotionally charged. At some historic properties, the perceived emotional comfort of the visitors, and that of the guide staff itself, preclude the accurate retelling of the awful conditions under which slaves toiled and lived. Here in central Virginia, however—at the plantations owned by Jefferson, James Madison and James Monroe—slavery interpretation is thriving. Indeed, it’s expanding.

“Slavery is an important part of the American story,” says Katherine “Kat” Imhoff, president of the Montpelier Foundation, the organization that operates Montpelier, the Orange County home of our fourth president, Madison. After his presidency from 1809 to 1817, he lived out his remaining 19 years at Montpelier.

“Without understanding the role of slavery in the founding era,” says Imhoff, “you can’t understand what happened afterward. …It’s such a painful subject for all Americans that we’ve tended to turn away from it, to gloss over it. I really believe strongly that that’s a disservice to all of us. As the leader of a cultural institution dedicated to telling a complete, accurate and human story about our country, I see the improved interpretation of slavery as crucial.”