In some respects we are all Anabaptists these days–at least those of us who are bothered by the way politicians tend to conflate the church and the United States of America.
I don’t know what the prevalence of Christian nationalism today has to do with recent trends in the historiography of American evangelicalism, but I am confident that future historians will make this connection.
My colleague Devin Manzullo-Thomas, the Director of the Sider Institute at Messiah College and a Ph.D student in American history at Temple University, has a nice review in The Conrad Grebel Review of three important books on the history of American evangelicalism.  They are David Swartz’s Moral Minority: The Evangelical Left in an Age of Conservatism; Brantley Gasaway’s Progressive Evangelicals and the Pursuit of Social Justice, and Molly Worthen’s The Crisis of Authority in American Evangelicalism.
Here is a taste of his piece, “The Not-So-Quiet in the Land: The Anabaptist Turn in Recent American Evangelical Historiography.”
In the historiography of North American Anabaptism, evangelicalism typically functions in one of two ways. Some Mennonite-produced analyses have depicted evangelicalism as a threat to Anabaptist distinctives, infiltrating and infecting thought and practice on peace, simple living, and the gathered church—a so-called declension thesis. By contrast, other scholarship—often produced by Anabaptist groups outside the denominational orbits of the (Old) Mennonite and the General Conference Mennonite churches—has envisioned evangelicalism as an ally to Anabaptist values. It 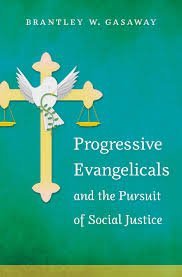 argues that shared convictions have guided the two traditions toward mutual influence and fruitful dialogue—a kind of integration thesis.  Whether focusing on corruption or cordiality, though, these two divergent historiographical models share at least one conviction: Given evangelicalism’s demographic and cultural dominance within North American Christianity throughout the 19th and 20th centuries, the Anabaptist story cannot be told without some reference to this larger tradition.
Yet for all the attention paid to evangelicalism by scholars of Anabaptism, scholars of evangelicalism have paid little to no attention to Anabaptists. Mennonites and Brethren in Christ rarely feature as actors in narratives of evangelical experience in America.  A variety of factors shapes this historiographical reality, including Anabaptists’ own ambivalence about their status as evangelicals. Perhaps the most significant factor in the absence of Anabaptism in evangelical historiography is what historian Douglas A. Sweeney has termed the “jockey[ing] for historiographical position” among two factions of scholars that he terms the Reformed and Holiness schools of evangelical history.  The historiographical models proposed by these two schools have dominated the literature on evangelicalism as it has emerged over the last three decades. In effect, they have so determined the actors in histories of evangelicalism that related groups—including groups like Anabaptists that do not always claim the evangelical label yet nevertheless moved through the 20th century in related ways—have been excluded from the narrative.

Even so, in recent years the prevailing models of evangelical historiography have proven too limiting. Several studies of post-World War II American evangelicalism published since 2012 exemplify the emergence of a new trajectory that moves beyond the “essential evangelical dialectic” of the Reformed and Holiness schools. It constitutes an Anabaptist turn in recent evangelical historiography, as scholars have inserted Anabaptists as key figures in the history of American evangelicalism.
Read the rest (with the footnotes) here.