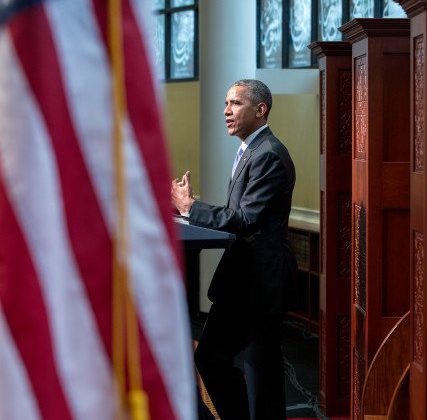 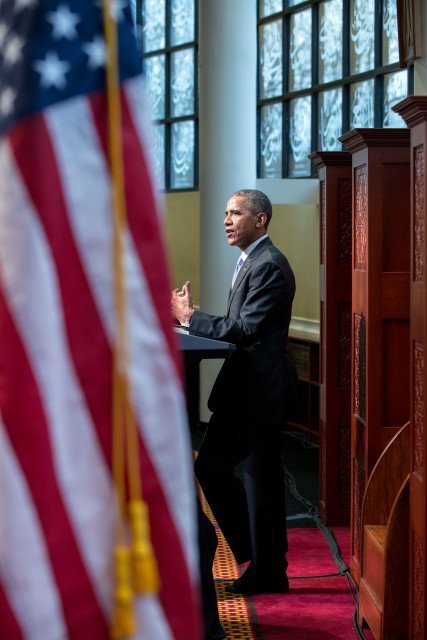 He penned an op-ed for Religion News Service.  I think this may be one of those primary source documents that will soon be assigned in American religious history courses.  It also may be another reason why some of us will miss Obama.
By the way, when Obama says that the founders defended religious liberty, but also thought that religion would help “strengthen our nation,” he gets it right.
(RNS) This past week, I had the privilege of visiting the Islamic Society of Baltimore, a mosque that serves thousands of Muslim American families, as well as neighbors of different faiths. Like houses of worship across our country, it’s a place where families come together to pray, but also a school where students learn and a health clinic that serves those in need. My visit was a chance to celebrate the contributions that Muslim Americans make to our country every day and to reaffirm our commitment to freedom of religion.
Our Founders knew that religious liberty is essential not only to protect religion, but because religion helps strengthen our nation. From our Revolution to the abolition of slavery, from women’s rights to civil rights, men and women of faith have often helped move our nation closer to our founding ideals. This progress is part of what makes us a beacon to the world.
Likewise, generations of Muslim Americans have helped build our country. They’re the teachers who inspire our kids, and the nurses and doctors whom we trust with our health. They’re the champions we cheer for — from Muhammad Ali to Kareem Abdul-Jabbar. They’re the police and firefighters who keep us safe, and the men and women in uniform who have fought and bled and died for our freedom.
Since 9/11, however, and more recently since the terrorist attacks in Paris and San Bernardino, some have blamed the horrific acts of a few on the broader Muslim community. Right now, many Muslim Americans are worried because threats and harassment against their community, are on the rise. We’ve seen Muslim Americans assaulted, children bullied and mosques vandalized, and we’ve heard shameful political rhetoric against Muslim Americans that has no place in our country.
When any part of our American family is made to feel isolated or targeted, it tears at the very fabric of our nation. So we have to tackle this problem together, head-on.
First, at a time when others are trying to divide us along religious lines, we have to reaffirm that most fundamental truth — that we are all God’s children, all born equal with inherent dignity. Mere tolerance of different religions is not enough. Our faiths summon us to actively embrace our common humanity. Muslim Americans can keep reaching out and sharing their faith to help more Americans understand Islam’s tradition of peace, charity and justice. Americans of all faiths can reach out to their Muslim American neighbors — perhaps even visit the nearest mosque — to help break down stereotypes and build understanding.
Second, as Americans, we have to stay true to our core values, and that includes freedom of religion for all faiths. An attack on one faith is an attack on all our faiths, and when any religious group is targeted, we all have a responsibility to speak up. We cannot be bystanders to bigotry. We have to reject any politics that targets people because of religion. We have to make sure that hate crimes are punished, and that the civil rights of all Americans are upheld.
Third, as we protect our country from terrorism, we should not reinforce the ideas of terrorists themselves. Groups like ISIL are desperate to portray themselves as religious leaders and holy warriors who speak for Islam. We must never give them that legitimacy. They’re not defending Islam or Muslims — the vast majority of the people they kill are innocent Muslim men, women and children. America could never be at war with Islam, or any other faith, because the world’s religions are a part of our national character. So we should never play into terrorist propaganda or suggest that all Muslims, or Islam itself, is the problem. That betrays our values. It alienates Muslim Americans. It helps our enemies recruit. It makes us all less safe.
Finally, just as all Americans have a responsibility to reject discrimination, Muslims around the world have a responsibility to continue to push back against extremist ideologies that are threatening some of their communities. This is not some clash of civilizations between the West and Islam; it’s a struggle within Islam, between the peace-loving majority and a radical minority. That’s why across the Islamic world, Muslim leaders are not only roundly and repeatedly condemning terrorism, they are also speaking out with an affirmative vision of their faith. America — and I, as president — will continue to help lift up and amplify these voices of peace and pluralism.
I want every Muslim American who may be wondering where they fit in to know that you’re right where you belong — because you’re part of America, too. You are not Muslim or American. You are Muslim and American. And I want all Americans to know that across our country and around the world, Muslim communities are standing up for peace and understanding as well.
We are one American family. And I’m confident that if we stay true to our values — including protecting the right of all people to practice their faith free from fear — we will stay strong and united. We are, and must always remain, one nation, under God, indivisible, with liberty and justice for all.