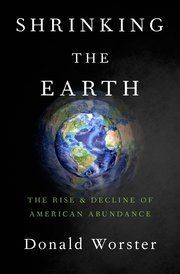 Donald Worster is Professor Emeritus at the University of Kansas. This interview is based on his new book, Shrinking the Earth: The Rise and Decline of American Abundance (Oxford University Press, 2016).
JF: What led you to write Shrinking the Earth?
DW: I wrote my new book to try to make historical sense of this moment we find ourselves in.
JF: In 2 sentences, what is the argument of Shrinking the Earth?
DW: It seems to me that we have reached the end of what we have been calling the “modern era,” which is now about 500 years old.  It began with Columbus and the explorers who gave the Old World a new one, “Second Earth” I call it, touching off a long period of economic growth and visions of infinite abundance.  Now that era is coming to an end, creating deep anxiety but also offering positive opportunities for creating new values and institutions.
JF: Why do we need to read Shrinking the Earth?
DW: There is an enormous anger and anxiety running through American society today, although Americans remain among the most privileged and successful peoples on earth.  We need to understand more clearly where we have been and what it has done to us, both good and bad, and then using that historical perspective, get ready for change.
JF: When and why did you decide to become an American historian?
DW: I became an American historian during graduate schools at Yale University in the 1960s, but always I have tried to see the US experience in broader transnational and global perspective.
JF: What is your next project?
DW: My next project is a book on China and its long history of intensive food production and how that country is experiencing profound change in its relation to the land.
JF: Thanks, Donald!