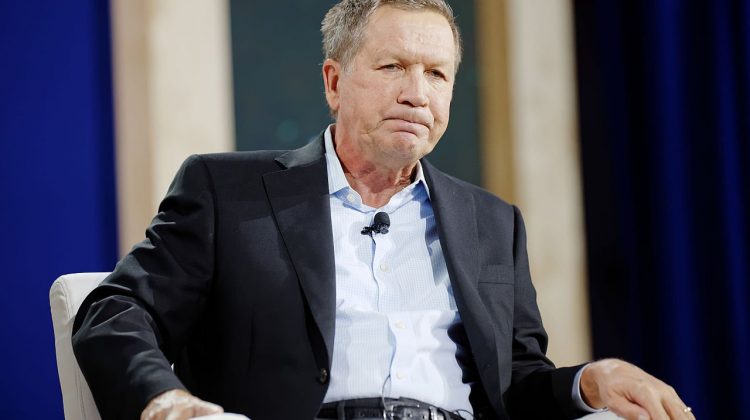 He just got endorsed by The New York Times.  Here is a taste of the Times editorial:

Gov. John Kasich of Ohio, though a distinct underdog, is the only plausible choice for Republicans tired of the extremism and inexperience on display in this race. And Mr. Kasich is no moderate. As governor, he’s gone after public-sector unions, fought to limit abortion rights and opposed same-sex marriage.

Still, as a veteran of partisan fights and bipartisan deals during nearly two decades in the House, he has been capable of compromise and believes in the ability of government to improve lives. He favors a path to citizenship for undocumented immigrants, and he speaks of government’s duty to protect the poor, the mentally ill and others “in the shadows.” While Republicans in Congress tried more than 60 times to kill Obamacare, Mr. Kasich did an end-run around Ohio’s Republican Legislature to secure a $13 billion Medicaid expansion to cover more people in his state.

“I am so tired of my colleagues out here on the stage spending all their time talking about Barack Obama,” he told a town hall crowd in New Hampshire. “His term is over.” Mr. Kasich said recently that he had “raised the bar in this election. I’ve talked about hope and the future and positive things.” In this race, how rare that is.

I am sure that Trump, Cruz, Rubio and others will exploit this in the next few weeks.  (The New York Times, of course, is a liberal newspaper).  But there are many more moderate evangelicals and Republicans, especially those who are fed up with the divisiveness of our political culture, that might see the Times endorsement as a positive sign.

It is also worth noting that many American voters are not voting in the closed (registered party members only) primaries and caucuses.  These independent voters, especially the moderate ones, may be attracted to a Kasich candidacy.  Unfortunately these voters may never get a chance to vote for the Ohio governor in the general election.

Kasich will need to come out of the GOP primary season on top and that will be very difficult.