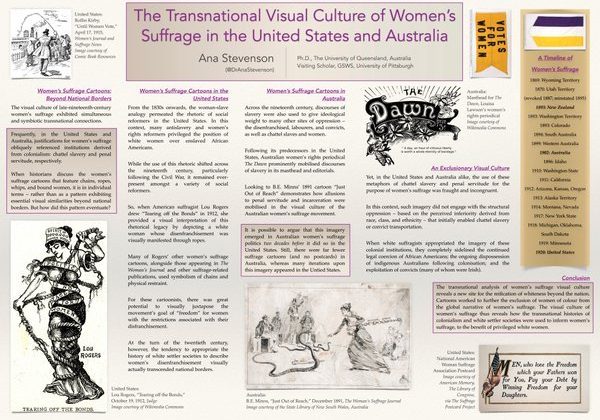 We are happy to have Ana Stevenson writing for us this weekend from the floor of the annual meeting of the American Historical Association in Atlanta.  Stevenson is a visiting scholar in the Gender, Sexuality, and Women’s Studies Program at the University of Pittsburgh. Here is her first post–JF 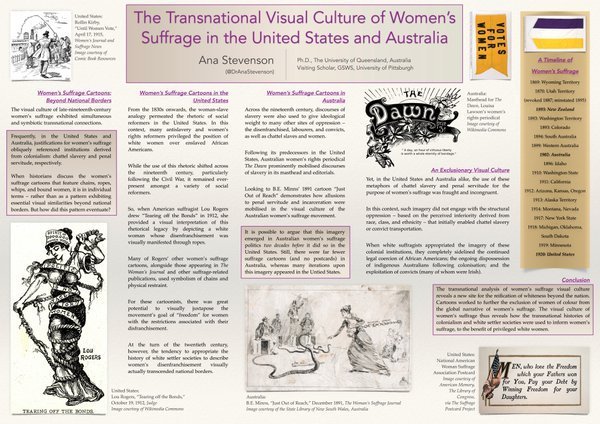 Today marked the exciting beginning and conclusion, which came all too soon, of the poster sessions for #aha16. Across the day, there were three sessions which revealed a range of historical research topics, from the medieval Ottoman empire to the history of food and Arizona’s suburban retail landscape during the 1970s and 1980s.
Many of the posters prioritized imagery and even used material culture to engage people in their discussion.
Various posters pivoted their research around historical maps and cartography. Jamie Mize’s (UNC at Greensboro) presentation, “Contested Cherokee Gender in the Early Nineteenth Century,” arranged its entire discussion around a detailed map. In contrast, “The Historical Map as a Geodatabase: Creating a Geographic Information System (GIS) from a Data-Rich Seventeenth-Century Map,” by Nicholas Gliserman (University of Southern California), matched one particular historical map to a contemporary map of the same region.
Other posters looked toward historical images that had circulated in the popular culture of social movements. In “Lives Abroad in Romantic Interest: Debate over Marriage in the American Woman Suffrage Movement,” Jessica Derleth (Binghamton University, SUNY) used postcards to depict antisuffragists’ fears about the way women’s suffrage would negatively transform the institution of marriage. My own poster, “The Transnational Visual Culture of Women’s Suffrage in the United States and Australia,” used pro-suffrage cartoons to discuss previously overlooked parallels across the Pacific.
Particularly fascinating was the use of material culture to accompany the poster. Lisa Munro’s presentation, “Indigenous Textiles and the Construction of Popular Ethnographic Memory in 1930s Guatemala,” was accompanied by some beautiful Guatemalan textiles.
Following an enduring theme at the conference more broadly, a number of posters engaged with digital humanities methods. The aforementioned poster by Gliserman signalled the beginning of a project hoping to collate many colonial maps together in a larger geodatabase.
Other digitally-informed projects included: “‘Commentaries’ in Migration: A Digital Humanities Examination of Literature, Law, and Practices across National and Chronological Borders,” by John Nathan Blanton (CUNY Graduate Centre), Micki Kaurman (MLA), and Nora Slonimsky (SUNY Graduate Centre); and “Commonwealth Slavery: Digital Studies in the History of Slavery at the Virginia Foundation for the Humanities,” by Susan Perdue, William B. Kurtz, Laura K. Baker, and Brendan Wolfe (Virginia Foundation for the Humanities).
Unfortunately, as a participant, I was only able to get a selection of photographs from the poster session, but do check the twitter feed #AHAposter to see some others. And if you’re thinking about making a historical research poster in future, check out the wonderful AHA resource, Effective Poster Presentations.
For those who managed to drop into the poster sessions, make sure you vote for your favorite poster by tweeting #AHAposter!